Perfect start to the new year for Team NZ

A couple of minutes after the clock had ticked over to 1800, just as the sun was setting and the dusk was rolling over Chang International Circuit, Graeme Dowsett gunned the #77 Team NZ Porsche 997 GT3 out of Turn 12 and down the couple of hundred metres to the finishline for the 188th time that afternoon and deliver GT Cup victory in the 6 Hours of Buriram, the third and penultimate round of Asian Le Mans 2017/18, after a race that had gone like clockwork. 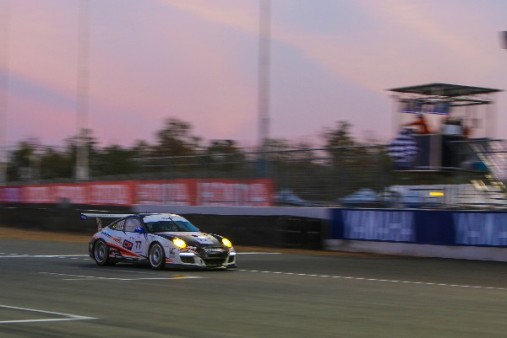 It was the perfect way to get our 2018 season underway and Graeme, together with his teammates John Curran and Will Bamber, didn’t put a foot wrong all afternoon.

We made a late entry into Asian Le Mans Series for this round, signing up for the championship just in time to contest the ‘second half’ of its season, taking in Buriram as the final round in Sepang last month.

It was the first time Asian Le Mans’ Thai round – or any Asian Le Mans race for that matter – was being run to 6 hours length (it was 4 hours long last year) and it also represented our young team’s first ever 6 hour race as, so far, we have contested a trio of 12 hour races that’s netted three podiums, one of which was a trip to the top step of the podium.

This time last year we also kicked off our track programme early in Buriram by joining the Asian Le Mans Series here, and we also won then so we unquestionably as we started the week we were looking to make it back-to-back wins.

In truth though, with a sparse GT Cup entry, our primary battle would be to reach the chequered flag with 6 hours of demanding racing at Chang International Circuit lying ahead – and our key objective was to get cockpit time for Graeme and John, especially important as the former’s most recent race was last September while the latter hadn’t sat in the car since last August, which was also the last time our venerable Porsche 997 GT3 Cup had turned a wheel.

So, for everyone – drivers, crew and car – it was a case of blowing away the winter cobwebs and getting to work out on track.

The race went like clockwork, John started the #77 car from class pole at the stroke of midday on Saturday when the lights turned to green to signify the start of 6 hours of racing, the Irishman taking particular care out on the 4.554 km/12 Turn circuit as this series involves four different classes – LMP2, LMP3 and GT3 as well as GT Cup – on the track together before, handing over to Will after the first hour.

The 24-year-old Kiwi, who has rocketed to mainstream attention over the last year thanks to his hugely impressive winning performances in Porsche Carrera Cup Asia and China GT, took over our car for the second hour with Graeme then stepping in to bring us up to the half distance mark. The second half of the race saw that driver rota repeated over the final three stints.

We had a couple of niggles along the way; the Porsche lost its front splitter early in John’s second stint while late in the race we had a small issue with fifth gear and had to manage gearbox temperatures to the finish, but in reality our #77 Porsche ran faultlessly once more, adding another six hours to its life and it’s history of successfully completing endurance races. Slick teamwork as usual from the crew capably backed up the drivers’ efforts.

Our first six-hour endurance race netted us the top step of the podium and we add that to Team NZ’s duo of podiums in the Sepang 12 Hours 2014-15 (one victory and one second place), as well as a podium in the Bathurst 12 Hour 2016 and of course our similar win in the Asian Le Mans 4 Hours of Buriram last year – all of which were achieved with the same Porsche 997 GT3 Cup.

Job done in the North East of Thailand, our racing year is now well underway and we look forward to resuming at the final round of Asian Le Mans Series, the 4 Hours of Sepang, next month.

Graeme Dowsett (New Zealand): “The race was great, it was quite hot at the start but very manageable, the car ran really well, there was just a little problem with the gearbox which was just about prevention more than anything else, we pulled it in had a look at it, did some rotations and then Will went back out and did his stint and when I took over I just had to keep the gearbox temperatures down, just manage the car a little bit, drive it a bit differently. It was a very clear run, a really great job with crew as we were a little bit short of the guys who could come out into the working area and so they did a fantastic job to do the stops like they did so overall a lot of fun and we’re pleased to be back in Asian Le Mans and now we’re looking forward to Sepang.”

John Curran (Ireland): “I ended up starting the race, there were no problems in my first stint and I then handed over to Will and then Graeme took over. Then in my second stint we lost the splitter, very early on as the car felt like a bit of a pig, but no matter, I brought it home in one piece, handed it to Will and Graeme concluded the race. Now we’re really looking forward to Sepang. It’s great to be back racing and great to be back in Asian Le Mans, it’s a really nice series to be part of and the organisers always do a good job.”

Will Bamber (New Zealand): “A good day for Team NZ, taking the victory in Asian Le Mans here in Buriram, the first 6-hour race for us so a pretty good day for us. The goal was to get as much driving time as possible for John and Graeme, and they did that. We had a few little niggles along the way, but mostly just in mind to keep the car in as good a shape as possible so we could get the driving time in and make sure we got to the end. We managed that very well. It was very hot out there today, the guys held up really well, the crew did amazing job and sorted out the few issues that we had, nothing major though, so all in all a really great day for us, maximum driving time for everybody, and we’re really looking forward to the next race.”