B-Quik Racing Co. Ltd. TM (“B-Quik”) is gearing up for the final round of Thailand Super Series (“TSS”) 2018 which takes place at Buriram’s Chang International Circuit this coming weekend with the Super Car GTM Drivers’ and Teams’ titles being in focus for the long trip up to the North East. 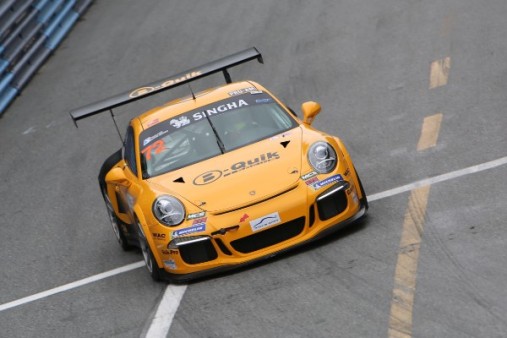 It’s going to be a double strategy for us because, as well as four entries in Super Car, our Young Driver Programme will be in the thick of the action and that’s going to include a first night race for one of the quartet.

In Super Car GTM Alif Hamdan leads the Drivers’ championship in the #72 Porsche 991 GT3 Cup with just the two races this weekend remaining.

But it’s all to play for with Alif holding a 16.5 point lead at the top of the classification ahead of two rivals while two more rivals are a further 5 points behind. So, with 60 points on offer Alif is going to have to work really hard and the team is going to have to prepare a car that can win. It’s equally tense in the Teams’ standings where we have a 36 point lead at the top over the factory Toyota outfit but with a maximum 105 points on offer (in a pair of 1-2 finishes can be achieved) it means the title race is still wide open.

If we can clinch the Super Car GTM Teams’ title it will be our second consecutive Super Car honour as we won the GTM Plus Teams’ championship last year – so we will be leaving no stone unturned in trying to nail down this most prestigious of titles.

In Super Car GTM Plus Henk J. Kiks and Peter Kox will team up in the #26 Porsche 997 GT3-R for a third consecutive race.

Ian Geekie will be looking to wrap up the Super Car GTC season in style with further podium finishes. He’s enjoyed a very strong year with four podium finishes from the six races so far this season – which include two in Bangsaen last time out – so we would like to see him add another two trophies to that haul this weekend.

He’s sitting handily in fourth in the championship and while the third-place driver has a decent cushion, the “maths” is still open; Ian knows how to grind out results when it matters and his hunger to win hasn’t dimmed one iota so you know he will be giving it his all in Buriram.

Jerasak arrives off the back of a superb win in the wet on the Phuket temporary street circuit last month while he raced here in the Vios when Toyota Motorsport supported “Super GT” back in June so he will be gunning for a good result – and there will be a twist as the Vios Cup runners will enjoy an exclusive night racing programme.

The action on track starts the day after tomorrow (Thursday 25 Oct) with Paid Practice before the next day (Friday 26 Oct) sees Free Practice in the Morning and Qualifying in the afternoon. Then its onto double header format races for all the TSS categories on Saturday (27 Oct) and Sunday (28 Oct), races that will conclude the TSS season. Toyota Motorsport will meanwhile have the most interesting programme with night practice and qualifying on Friday evening before hold its races after the sun goes down on Saturday.

Henk J. Kiks: “We’re looking forward to Buriram and hope we can end the TSS season on a high note. Our primary focus will be to defend the lead in the Super Car GTM Teams’ standings and to back Alif up to get him over the line in the Drivers’ championship. For me, I’m really looking forward to hooking up with Peter again in the GT3-R and this will be our third race in the car so we should be getting right up to speed. The target is clearly to have two good races and to do our best to plant the car on the podium. It will be a tough week for sure, we’re going to have to be at the top of our game and work our socks off, but we’re prepared and ready to go.”

Peter Kox: “From initial doing one, in the end I did three races with B-Quik together with Henk this year which I have enjoyed a lot. Next weekend will be the final round of the TSS and we want to end the season on a high. I’m sure that Henk and the team will want to do the same.”

Alif Hamdan: “I’m very happy to be back with B-Quik to finish off the last races of the season with such a talented team. With the guidance and help from colleague and long-time friend Will Bamber, I hope we can come up with a fast car together with the team’s talent pool of race engineers. I’m looking forward to the challenges ahead, as a team I’m sure we can repeat the performance we had at the last round in Bangsaen.”

Ian Geekie: “Hard to believe we are nearing the end of season but I’m really looking forward to being back on track at Chang International Circuit in Buriram. After some technical issues last time there I’m hoping to finish the season with some good results. My thanks again to B-Quik Racing for the opportunity to race with them.”