There will be four Porsche 911 GT3 R at the starting line of the FIA GT World Cup in Macau (China) from 15 to 18 November. The Manthey-Racing team will be using two of the vehicles – each with around 500 hp – driven by Earl Bamber (New Zealand) and Laurens Vanthoor (Belgium). Two-time Le Mans winner Bamber will be joining the race in a car that has been given a particularly special look: an eye-catching red and gold design that’s inspired by the Chinese year of the dog. Two more cars will be prepared by customer team Craft Bamboo Racing, for Porsche Young Professional Mathieu Jaminet (France) and Chinese local hero Darryl O’Young. 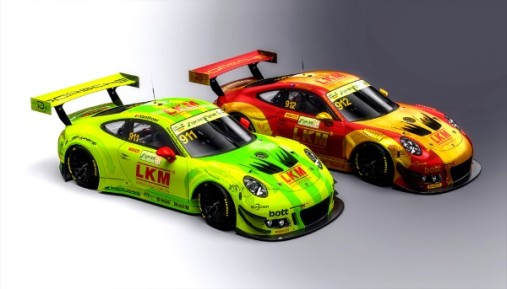 The race
The Guia Circuit, 6,115 km long and located in the former Portuguese colony of Macau, is considered one of the most difficult street circuits in the world. Located in Asia’s gambling paradise, this track’s long straights, fast bends, and spectacular sections such as the Lisboa Bend are renowned far beyond China’s borders. And the course has another extraordinary feature too: in all training sessions and races, there’s a strict ban on overtaking in the “Melco Hairpin”. Car and motorbike races have been held on the streets of Macau – some of which are just seven metres wide – since 1954, and the FIA GT World Cup has been a fixed item on the agenda of the Macau Grand Prix weekend since 2015.

The Porsche drivers at the FIA GT World Cup
Factory driver Laurens Vanthoor is aiming for his second victory at the GT World Cup in the car with starting number 911. The Belgian won the 2016 race in spectacular fashion. Shortly before the finish line, Vanthoor slid into the crash barrier as he battled Earl Bamber – now his colleague – flipped the car, and then crossed the line on its roof, taking first place. These two Macau specialists were the key players during that weekend of racing two years ago. Bamber will drive the car with starting number 912 in 2018, with Porsche Young Professional Mathieu Jaminet taking to the start line for the first time. The Frenchman will be driving in the Porsche 911 GT3 R with starting number 991. In the sister car (number 55), Hong Kong Chinese driver Darryl O’Young is celebrating a home game, just 65 km from where he lives.

The Porsche 911 GT3 R
The 911 GT3 R has been designed by Porsche for the global GT3 series. This customer sports racer which has over 368 kW (500 hp) of power celebrated its racing première at 24 Hours of Daytona in January 2016, showcasing the cutting-edge four-litre, six-cylinder boxer engine with direct fuel injection. It’s won many international racing series since then, including the IMSA SportsCar Championship, World Challenge, ADAC GT Masters, and the 24-hour race on the Nürburgring.

Pre-race comments
Dr. Frank-Steffen Walliser (Vice President Motorsport and GT Cars): “I believe that we have a score to settle at Macau – a very particular one. We should have won the race in 2016, but that’s not how things turned out. And although it was one of our current factory drivers that won, at that time he was still working with a different marque. This time, Porsche should be head of the field. Macau is a race like none other on earth. The race conditions are appropriate for the location in a famous gambling capital: impeccable sports performance and ability are always a given, but in Macau, victory is often decided by a little bit of luck. The circuit is an extraordinary mix: there’s a permanent ban on overtaking in the slowest passage, where drivers navigate a hairpin bend at 40 km/h, but elsewhere they travel through a barrier-lined channel at 260 km/h. I’m extremely excited.”

Sebastian Golz (Porsche 911 GT3 R Project Manager): “The street circuit is one of the most unforgiving racetracks in the world. Inside the narrow, barrier-lined channel, drivers have to use every centimetre to optimise the bend radius. And the undulating asphalt demands a soft balance: drivers need to find a good compromise between a certain ease and precise steering. Drifting onto a bump or making even a slight driving error generally takes the vehicle directly to the barriers – which results in an accident. We are well equipped with our Porsche 911 GT3 R and skilled drivers. I’m optimistic that we’ll be up there at the front.”.

Laurens Vanthoor (Porsche 911 GT3 R #911): “It’s going to be exciting. Not least because I’m now able to race against my friend and colleague Earl – who I’ve already shared a cockpit with in the USA this year. We’ve been working hard on preparations for Macau, and it’s been really successful so far. However, on this track things often turn out differently from how you expect them to. I’m certain that we will be among the head of the field with our Porsche 911 GT3 R.”

Earl Bamber (Porsche 911 GT3 R #912): “It’s going to be a lot of fun! I can hardly wait to finally drive in Macau again – it’s one of my absolute favourite races. Two years ago we had a car there with perfect set-up, and I hope that we will be very competitive agai. I’m also really excited that my car’s design celebrates the year of the dog from the Chinese horoscope – my many fans in Asia will think that’s great.”

Mathieu Jaminet (Porsche 911 GT3 R #991): “I’m excited because I’ve never been to Macau. I’ve watched a lot of races on TV over recent years – some of them were wild Macau drives by GT cars, touring cars, Formula Three, or even motorbikes. I’m going to study on-board recordings and data in depth – hopefully I will be able to get an impression of the route that way. It’ll be difficult for a rookie like me, but it’s an amazing challenge. I’m already familiar with the Craft Bamboo Racing team from my race in Suzuka, so along with the Porsche 911 GT3 R, there’ll be at least two known variables among the many unknowns in this tricky reckoning. It’s going to be exciting, and hard work.”

Darryl O’Young (Porsche 911 GT3 R #55): “I’m so happy that I’ll be joining the starting line in Macau in the Porsche from Craft Bamboo Racing. It’s a home race for me, and I always want to give an especially great performance in those. All of my previous wins on this particular route have been in a Porsche, so I have great hopes that perhaps I will gain my fourth success in Macau. I had some bad luck last year when I became unable to make much adjustment because of slicks on a wet section in the final phase – but that shouldn’t be an issue this year.”