Whilst the world took a hiatus during the pandemic, the team at MADMAX Racing used lockdown to turn their road legal Porsche 911 Turbo into a record smashing beast. 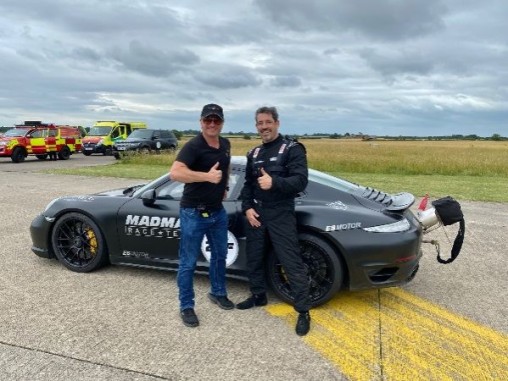 On Saturday 18 July 2020, multiple world speed record holder Zef Eisenberg dusted off his race suit and got back in the saddle successfully securing another five victories.

Eisenberg, better known for his motorbike speed record exploits achieved over 240mph in his MADMAX 1200hp + road legal Porsche 911 Turbo specially built and prepared by ES Motors and his MADMAX Race Team and set the following:

Fastest Porsche in the UK

In nine years, the self-proclaimed ‘Speed Freak’ has now amassed over 70 British, World, UKTA, ACU and Guinness speed records racing everything from cars, quads to motorbikes.

These latest records smash his own top speed of 223.4mph set in the same Porsche at Pendine Sands in May 2019 – where he became the fastest car on sand, emulating his hero Sir Malcom Campbell’s record set in 1927 (174.8mph) – a record that stood for nearly 90 years as well as superseding Hollywood star Idris Elba’s ‘flying mile’ speed record (180.361mph) set in 2015.

Eisenberg said “the hardest part of the build was making sure that the Porsche 911 remained fully road legal. This is no trailer queen or stripped out race car the interior has been kept as standard with its luxury full leather interior trim, road tyres, air con etc, plus road legal exhausts. The only difference is that it features a full FIA sanctioned 6-point roll cage, race seats and 6-point harness, door bars and carbon cup race doors, a very powerful race engine and a newly fitted parachute!”.

He continued “The team have worked tirelessly on the engine to ensure that it can withstand 3 miles of full power with well north of 1000hp at the wheel, which is no mean feat for a road legal car. Much work has been done to still make it safe and road legal. We had to ensure that it still had the ability to drive in traffic jams without overheating and that I could actually drive to the event and fill her up at with regular unleased along the way. There’s even room for a cup holder between the roll cage for my takeaway coffee! It’s a 240mpg, 1820kg, one off Porsche built by us”.

So, what now . . . Eisenberg replied “We just need to turn up the power and increase the speed even more at a big speed record attempt in September”.

About Zef Eisenberg and the MADMAX Race Team:

Zef ‘MAX’ Eisenberg is the presenter of ITV4 ‘Speed Freaks’, and holds over 70 British, World, ACU, FIM and Guinness speed records. In September 2016, he survived ‘Britain’s fastest-ever motorcycle crash’ at 230mph, on a 560bhp Rolls-Royce jet turbine-powered motorcycle. He broke 11 bones, was hospitalised for three months, spent a further three months in a wheelchair and had to learn to walk again. He defied doctors by racing exactly one year after the accident on the anniversary of the crash. In May 2018, he achieved the world’s fastest motorbike record on sand, at 201.5mph, and was challenged to repeat this success on four wheels. In May 2019, in a highly modified Porsche, he became the world’s only person to exceed 200mph on sand with a bike and car, as well as hold the flying mile record for both. In Sept 2019, he set 3 x FIM world records for the world’s fastest electric powered motorbike at Elvington in Yorkshire. Eisenberg remains to be the only person in the UK to have achieved a flying mile record on a motorbike and car.