Ross Wylie makes the short journey from his Dumfries and Galloway home to contest the latest rounds of the Porsche Carrera Cup GB at his “home” Knockhill track next weekend (29-30 Aug). Ross, who lives in Thornhill just 90-miles from the 1.27-mile track in Fife, starts the first of two, 30mins races placed sixth in the “Pro” standings having placed seventh and fifth in the latest races at Oulton Park last weekend (22-23 Aug). 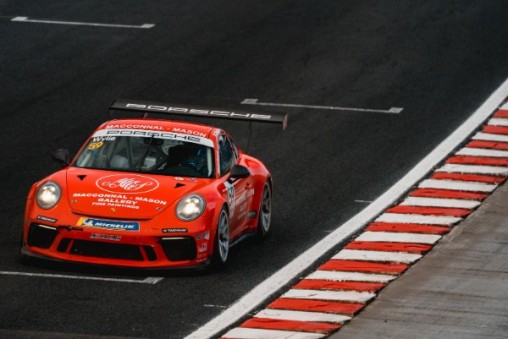 Wylie started his MacConnal-Mason Gallery supported Porsche 911 GT3 from the third row of the grid for Saturday’s race at Oulton and was at the back of a three-car battle for sixth place in the closing stages, ultimately finishing seventh – less than a second off sixth-place. In the second race around the wet but fast drying 2.22-mile Cheshire track yesterday, Wylie started seventh and was up to fifth place in his In2Racing 911 before a Safety Car period to retrieve a stranded car – Ross holding station to finish 4secs off a podium placing after 15-laps.

“My first ever visit to Knockhill was in 2003, as a 12-year-old, to watch the late Steve Hislop race in British Superbikes and then a few years later for a British Touring Car Championship event with my father. I first drove at Knockhill in 2008. Having just won the British Junior Kart Championship, I successfully completed my ARDS [Association of Racing Driver Schools] test to get a licence to go car racing. My first race there was 2012 in the Celtic Speed Mini Cooper Cup, winning a couple of times, and also the Knockhill Young Saloon Car Driver of the Year. Most recently, it was three years ago in the Porsche Carrera Cup when I achieved a class podium.

“Knockhill is a very technical circuit and is also a very short lap which makes it even more challenging. Racing at your ‘home’ track always brings a little added pressure but I’m very much looking forward to racing there. It’ll be very weird with no spectators present and not having all of my family and friends cheering me on there like in a ‘normal’ year. I’ll get the opportunity to reacclimatise myself to Knockhill for the first time since August 2017 in an official Porsche test day on Wednesday.

“It was a solid weekend for me at Oulton but not with the results I’d been hoping to achieve. It’s a case of finding a crucial tenth of a second which is the difference between starting on row three and the front row. Overtaking is very difficult and I made life even tougher for myself in Race 1 by stalling at the start but recovered to seventh at the chequered flag. Race 2 was tricky as there had been heavy rain earlier, the track was drying, but wet weather tyres were still required. It was challenging for everyone and tyre management was required as the track dried with every lap but I managed fifth. It’s work in progress as we head to Knockhill.”