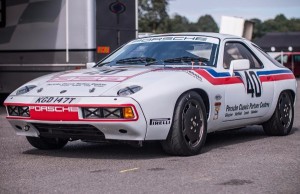 Porsche GB will celebrate 40 years of the 928 at this year’s Lancaster Insurance Classic Motor Show, with Discovery, held 10-12 November at Birmingham’s NEC. To mark the anniversary, four UK Porsche Classic Partner Centres have entered a 1978 928 in the 2017 season of the HSCC 70s Road Sport Championship, with racing legend Richard Attwood at the wheel.

In 1977, Porsche launched an all new front-engined sports car. Originally designed as a replacement for the 911, the 928 was a luxurious grand tourer powered by a Porsche designed 4.5l V8 engine producing 240hp. A focus on lightweight construction saw the extensive use of aluminium for the body panels rather than traditional sheet steel.

The 928 never did replace the 911 yet still secured its place in Porsche history as an outstanding luxury GT car and the last of the traditional 2-door, transaxle models.

And there may be even more to celebrate in the coming weeks as Richard Attwood is currently leading his class in the HSCC competition with just two more meetings until the end of the season.

British racing driver Richard Attwood raced for the BRM, Lotus and the Cooper Formula One teams, competing in 17 World Championship Grand Prix, achieving one podium and scoring a total of 11 championship points. He was also a successful sports car racing driver and won the 1970 24 Hours of Le Mans race, driving a Porsche 917.

As part of Porsche GB’s support of its heritage, it now has four dedicated Porsche Classic Partners in Glasgow, Hatfield, Leeds and Swindon, which are centres that have exceptional classic experience to provide support and parts for its historical models as well as offering classic Porsche vehicles for sale.

James Toye, Business Development Manager for Porsche GB, said: “For us, tradition and innovation are bound closely together. More than 70 percent of all Porsche vehicles ever built are still on the road and therefore play a defining role in shaping the fascination of the brand.