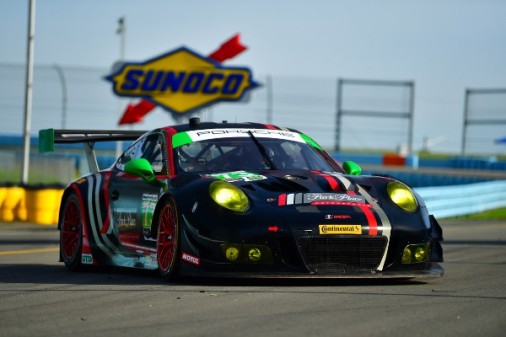 Park Place Motorsports added the No. 73 to its lineup for Road America after a successful run at Watkins Glen International. The team finished sixth after forgoing qualifying at The Glen due to substantial damage in the final practice session. Sixth place was Porsches highest finish in the GT Daytona class this season.

Team Principal Patrick Lindsey and Porsche Factory Driver Jörg Bergmeister set the lineup for the two hour and 40-minute race Aug. 5. The Continental Road Race Showcase is their fourth race this season in the IMSA WeatherTech SportsCar Championship but first sprint race. In 2017, Lindsey and Bergmeister claimed second place on the GTD podium at Road America.

Bergmeister has four wins under his belt at Road America. Lindsey and Bergmeister together have collected two podiums in Wisconsin together out of their two seasons racing together. Perhaps it’s all the wonderful memories they share at this track in particular that has them ready for the return.

“We’re excited to go to Road America because we enjoy the track,” Lindsey said. “It’s a fun track to drive, we’ve done well there and the fans are great. It makes for an enjoyable weekend. It has been a while since we’ve done a short race but there is no issue jumping into sprint style racing for anyone. It may feel odd not being in the car longer, that’s about it. The crew is up to speed, and so are Jörg and me.”

The No. 71 of driver David Kolkmann competes in Round 9 and Round 10 in the Porsche GT3 Cup Challenge USA by Yokohama at Road America. A rainy start to the weekend paired with multiple yellow flags at Watkins Glen left Kolkmann with two fourth-place finishes. Undeterred, Kolkmann felt the weekend was encouraging and proved how quickly Park Place Motorsports adapts to challenges.

Kolkmann sits third in the points championship for the Platinum class. He has never been to Road America before this race weekend and will have to learn the track quickly for a chance to claim the top step of the podium once again. He enters the weekend with two wins, and two podium finishes to his name.

“Watkins Glen was a bit difficult of a weekend for the team, but I think we can be back on the podium at Road America,” Kolkmann said. “I’ve been practicing on the simulator, but I have never seen the track in person before. I don’t have a problem learning new tracks so it should be fine. I’m excited to go because everyone seems to enjoy it there. Hopefully, we can have a great weekend.”

Sunday, Aug. 5, is race day for both series. Race Two takes place in the morning with the Continental Tire Road Race Showcase capping off the weekend in the afternoon. Fans can watch Porsche GT3 Cup Challenge USA by Yokohama live by streaming the race on imsa.tv.

« Hurley Haywood and his 1973 Porsche 911 2.7 RS at the Goodwood Festival of Speed 2018 Video
At Road America, Christina Nielsen Determined to Win Back a Podium Finish for Wright Motorsports »