“Motor racing is like one big family, ultimately, and when you come back to it, that’s really what it feels like.”

The season finale of the 2018 Thailand Super Series was held at the Chang International Circuit in Buriram, Thailand on the weekend of the 27th and 28th of October. After dropping points in the previous rounds due to a pit stop infringement the team found themselves 16.5 points behind championship leader Alif Hadam, however, the team were still in confident mood as a maximum of 60 points were still available. For the season finale, New Zealander Shaun Varney would once again co-drive the Porsche 911 with team owner and #1 driver Thomas Raldorf.

As always the team and the car arrived early in the week to begin preparations, and the Porsche was in fine form as Thomas clocked his fastest ever time of 1:39.1 around the 4.55km circuit during the first practice session of the week. During the next sessions, both Thomas and Shaun tried out different setups to get the best out of the car before qualifying.

Qualifying did not go as planned as the initial tweaks to the setup in practice had worked but a driving error from Thomas and slower traffic hindering Shaun’s flying laps put them on the back foot. Thomas clocked a 1:39.6 in his session while the young Kiwi was just fractionally faster with a 1:39.5 putting them both in 6th place for Race One and Race Two respectively, while Championship leader Alif was up to the grid in 2nd place with a 1:38.2.

It was a confusing climax to Race One for the Unixx TR-Motorsport team who were left waiting anxiously for several hours after the checkered flag had fallen to hear the official result. The anxious wait also included a trip to the steward’s room along with six other teams who had to try and explain their infringements relating to the compulsory Pit Stops. 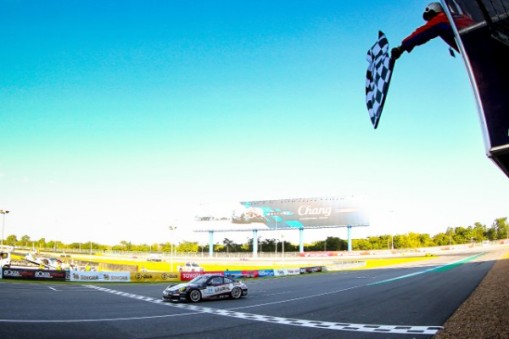 After a disappointing qualifying and the championship slipping from their grasp, the team were in a despondent mood, but as the race neared they were aware that anything can happen in Motorsport and usually does, and how right they would be.

Shaun Varney had the challenge of fighting through the pack from 17th in stint one, and as the lights went green he quickly set about the task overtaking several cars on the opening laps. As the pit window grew closer the Porsche started to have brake issues forcing Shaun to ease off and when he eventually pitted was, the team were 5th in class and 15th overall.

The driver changeover was one of the quickest the team had ever done, but the nervous pit crew suspected it may have been too quick….

Thomas took control for stint two and even with the brakes failing he made his customary Viking charge through the field, incidents ahead helped the teams cause as one of the leading Toyota’s went off into the wall ending his race while the other Toyota suffered engine issues pushing them back down the field.

With only a few minutes of the one hour race to go Thomas was now up to an impressive 3rd in class and 10th overall, however, the timing screens showed investigations were underway on several teams for compulsory pit stop infringements.

Thomas made no further improvements to his position and finished 3rd in class and 10th overall. The team celebrated the great effort both drivers had put in and then set about analyzing the pit stop to see if indeed they had released the car too early.

While the team were still deliberating about the pit stop Thomas was called ominously to the stewards. After an agonizing few minutes, Thomas returned with the news the team were fearing.

The team had released the car six seconds too early resulting in a 36 second penalty, however, due to some cars being over one lap down, other teams receiving similar penalties and the number 15 car being disqualified for pitting under a safety car the team emerged unscathed and even made up one further place to finish 2nd in class and 9th overall.

As Thomas explained what had happened the expressions on the teams faces quickly changed from agony to ecstasy!

The deficit to the championship leader was now cut to just 9 points with all to play for in Race Two.

After the positive result in Race One, the team were confident of mounting a serious challenge for the title in Sundays Season Finale, unfortunately, it wasn’t to be….

Thomas took control of the 911 for stint one and got off to the perfect start overtaking 4 cars on the opening lap of the one hour race. With Championship leader Alif going well further up the field Thomas maintained his charge and quickly closed down Porsche Academy driver Will Bamber in the B-Quik Porsche, both drivers jostled for position for several laps until Thomas found an opening and swept past the young Kiwi and hastened his pursuit of another B-Quik Porsche a few seconds ahead.

Shortly after the pit window opened the B-Quik Racing Team brought four of their cars in for the driver changeover, Thomas stayed out for the next few laps then pitted with the car in a great position for the second stint. The pit crew did an outstanding job with a smooth driver transition and tire change and as Kiwi Shaun Varney raced down the pit lane all seemed well, however, Shaun radioed back to the pits that there was an issue with the gears.

Shaun didn’t hesitate and drew on his experience and knowledge of the German sports car by pulling over on the back straight, shutting down the car down and initiating a full restart that thankfully reset the gears, although the team were now at the back of the field with a mountain to climb. A safety car period helped the teams cause as Shaun quickly caught up but then with just 3 minutes to go the right front brake caliper failed at turn 12 sending Shaun and the Porsche into the gravel trap and just like that the season was over….

Even though the team failed to finish the race they did finish in 2nd place for the driver’s championship. Congratulations from everyone at Unixx – TR Motorsport to Alif Hamdan on securing the driver’s title, Alif has shown great consistency throughout the season and is a deserved winner.

“We gave it our best shot but come up just short, the whole team and I are disappointed and we are left to reflect on what might have been this season, however, that being said we are still very proud with what we have achieved and our progression as Racing Team in 2018. Congratulations to Alif and the B-Quik Racing Team on winning the Championship thoroughly deserved and a great bunch of people. 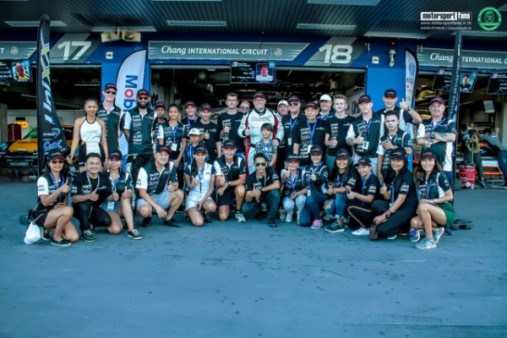 I am so lucky for the team I have behind me, the commitment and support throughout the year these guys have shown has been incredible, we have shared the highs and the lows, we have won together and we have lost together. Over the years the camaraderie within the team just gets stronger and stronger and this is an integral part of the success we have experienced these last few years.

The number of fans who joined us for season finale was very humbling, and to see them all in the stands cheering us on was fantastic, many thanks to all our fans who have joined us throughout the year, your support is greatly appreciated and we look forward to welcoming you again on 2019

Finally, I would like to thank all our sponsors who have given us their hard earned money and their time and without whom we would have never made it out of the garage. Their support allows us to go racing with some of the finest cars and drivers in South East Asia, I hope every one of them has enjoyed their time with us and much like our fans we hope to welcome them back again in 2019 and share even more experiences with us.

Even though the season has only just finished we are already preparing for 2019, there are lots to look forward to as we will have two new cars on the grid and once again Tony Percy will giving it his all in the Thailand Super Series, while young Victor continues his career development with the team. We will release more details about the 2019 season in the coming weeks, once again I just want to say thanks to everyone involved who help to make our team so special.”

And a special thanks to the 60 plus supporters who made the journey to Buriram to cheer on the team and to all the supporters who followed the team throughout the season.