Drivers from the region and across the globe will line up for Round 2 of The Porsche BWT GT3 Cup Challenge Middle East when it returns to Bahrain this weekend. Following testing on Thursday 6th December, racing will get underway on the 7th and will see three races across two days at the Bahrain International Circuit. 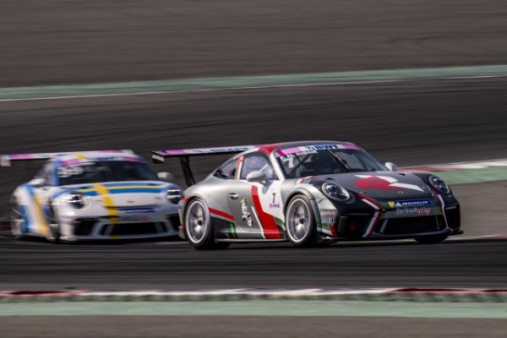 Heading into Round 2, Al Faisal Zubair (73 pts) has a slender lead of 2 points over current Porsche Carrera Cup GB champion Tio Ellinas (71 pts) of Cyprus and Michael De Quesada (54 pts) of the United States of America third in the overall standings. In fourth sits Berkay Besler of Turkey, fifth is held by Khalid Al Wahaibi and sixth position belongs to Frenchman JB Simmenauer, demonstrating the international make-up of the grid in Season 10.

Ahead of an action-packed second race weekend of the longest running motorsport series in the Middle East, fans will be especially delighted to see the line-up proudly feature home-grown favourites Isa Al Khalifa and Ali Al Khalifa Bahrain, alongside an additional 15 drivers from 13 different nations.

Speaking ahead of Round 2, Manager of the Porsche BWT GT3 Cup Challenge Middle East and Lechner Racing, Walter Lechner, sad: “Round 1 already displayed just why the series is the most exciting one-make racing series in the region. With so much talent on display from across the globe, I speak on behalf of everyone at Lechner Racing when I say just how excited we are to see what Round 2 has in store for us. Bahrain is home to one of the best tracks in the region; a track which lends itself to fierce, competitive driving. The addition of a third race – a night time race – will only improve the format of the race weekend, giving our drivers an extra opportunity to make podium and take momentum into Round 3”.

The Porsche BWT GT3 Cup Challenge Middle East is recognised as having a profound impact on the sport’s development as it was the first regional championship backed by a manufacturer in the Middle East. It gives official drivers access to the latest Porsche 911 GT3 Cup race car, the same model used for international motorsport editions, such as the Porsche Carrera Cup and the Porsche Mobil 1 Supercup, the official F1 support race.

Official driver standings after 3 of 16 races

Dates Round/ Circuitn Number of Races