Park Place Motorsports celebrates another homecoming at Round One of SRO Pirelli GT4 America Sprint for driver Alan Brynjolfsson as the No. 7 VOLT Lighting Porsche Cayman GT4 Clubsport MR takes to the streets of St. Petersburg, Florida. 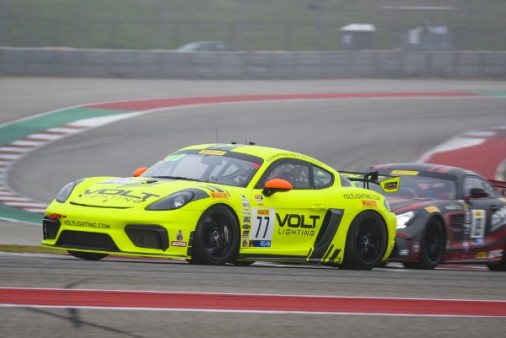 SRO Pirelli GT4 America Sprint joins the NTT IndyCar series at its season opener, the Grand Prix of St. Petersburg, for two rounds of racing March 8-10. The street circuit features 14-turns accompanied by quick straightaways for passing opportunities. As is typical of street courses the circuit is characterized by having little room for runoff making precision driving a must.

Brynjolfsson is running the Porsche in his first solo appearance of the 2019 season after capturing two first-place finishes in the opener of Pirelli GT4 America EAST. While Brynjolfsson and co-driver Trent Hindman proved, they were a force to be reckoned with as a driver pairing Brynjolfsson showed he alone is not to be overlooked. He closed Race Two to cap off the opening weekend with a second win.

Team Principal Patrick Lindsey is no stranger to the streets of St. Petersburg having run in the event during his days in the newly renamed SRO Blancpain GT America series.

“I think Alan will shine at his home track,” Lindsey said. “He’s a smart driver; he won’t get himself into trouble; which is so easy to do on a circuit like St. Pete. It can be very unforgiving because the track is tight, and the cars are just packed together. I’m proud to have Alan on our team, and I hope he does well in front of his home crowd. To kick the year off with wins in two championships would be incredible. I know the team can get the job done.”

The weekend kicks off with practice Friday, March 8 at 9:05 a.m. ET and again at 3:20 p.m. Saturday, March 9 begins with Pirelli GT4 America Sprint qualifying and ends with a 50-minute Race One at 4 p.m. A second 50-minute sprint concludes the weekend on Sunday, March 10 at 11:20 a.m. To follow both races use live timing and scoring or the live stream on http://world-challenge.com.