Young Omani driving sensation Al Faisal Al Zubair reclaimed his crown today as champion of the Porsche BWT GT3 Cup Challenge Middle East. After battling through a tough opening race in Round 6 at the Bahrain International Circuit, Al Zubair’s lead cannot be caught even with one race to go as the official support race to the 2019 Formula 1 Gulf Air Bahrain Grand Prix tomorrow. 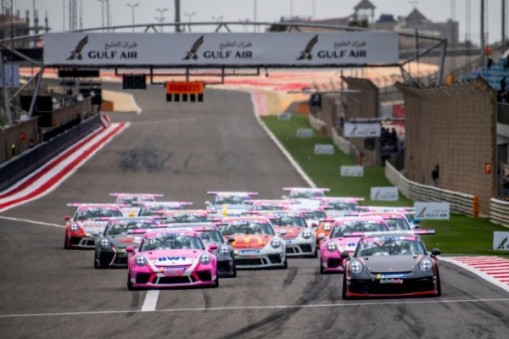 With 14 of the 16-race season complete, Al Zubair headed into the final round knowing that a top ten finish in Race 1 would be enough to secure a consecutive title. Starting in fourth, the Omani drove with the experience of a seasoned professional to finish the race in the top 10, and in doing so gaining 9 points to put the championship title firmly out of reach for Turkey’s Berkay Besler. Newcomer Besler did all he could, finishing first in the race, but it wasn’t enough to secure the overall title and settled for second in his first season in Porsche BWT GT3 Cup Challenge Middle East.

With Round 6 serving as the official support race for the 2019 Formula 1 Gulf Air Bahrain Grand Prix, all eyes were on the opening race of the final round, and the ultra-competitive roster of international drivers. The 18-car grid saw the return of Luxemburg’s Dylan Pereira and current Porsche Carrera Cup GB Champion, Tio Ellinas of Cyprus, and it was little surprise to see both drivers starting the race on the front row following a dominant qualifying display yesterday.

Ellinas started in pole following a rapid time of 2:01.881, closely followed by Pereira in second after clocking 2:01.995. Besler started in third followed by Al Zubair in fourth.

The 10-lap race was one of the most fiercely competitive races of the season and included the most talented roster of drivers the series has ever seen. Ellinas was penalised for a jump start and although remained in the lead throughout the race, he was pushed back to 14th due to his error. Besler showed the motorsport world why he’s one of the rising stars of the championship, after battling past Pereira into second place on lap eight and holding him off for the remaining two laps to finish first. Pereira finished in second, with the impressive Frenchman J.B. Simmenauer in third. Simmenauer also collected the necessary points to secure third overall in the championship.

Speaking of after securing his second championship title, Al Zubair said: “I’m delighted to win the Championship. It’s been a long and highly competitive season, with a lot of very talented drivers on the grid. I’ve had to be patient throughout. Sometimes as a driver you want to go all-out in every race and try to finish in first or second in every race, but to win a championship you need to choose your battles and play the long-game. I’m very pleased to win a consecutive title and look forward to celebrating with the team later.”

Following an action-packed Race 1, Race 2 is scheduled for 15:30 tomorrow ahead of the 2019 Formula 1 Gulf Air Bahrain Grand Prix. Ellinas will again start on pole again, followed by Al Zubair in second position and Besler of Turkey in third.

With the championship podium places decided, all eyes will now turn to the battle for fourth spot. Oman’s Khalid Al Wahaibi currently occupies fourth, ahead of South African Saul Hack.

Following Al Zubair’s win, Walter Lechner said: “Al Zubair is a true example of the talent that exists in the Middle East region. Having first joined the series in 2016, his improvement is outstanding. Three years on, he is now a double champion and has raced in Europe against the best Porsche GT3 Cup drivers. We are incredibly proud of his achievements and hope this empowers young Arab talent in the region to step on to the tracks with us and develop careers in motorsport.”

The Porsche BWT GT3 Cup Challenge Middle East was the first regional championship backed by a manufacturer in the Middle East and is proud to continue nurturing home-grown motorsport talent from the region. It gives drivers access to the latest Porsche 911 GT3 Cup race car, the same model used for international motorsport editions, such as the Porsche Carrera Cup and the Porsche Mobil 1 Supercup, the official F1 support race. Season 10 of the championship concludes tomorrow.