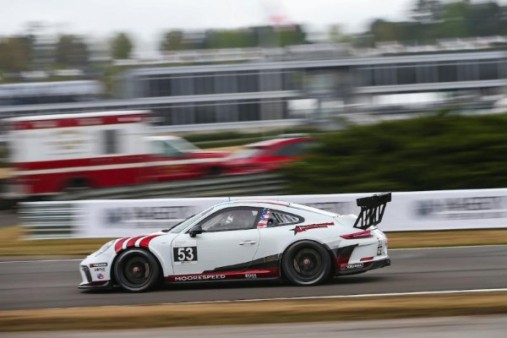 “Definitely, the second-place finishes were the highlight of the weekend for sure,” Dickinson said. “I mean, obviously, you want to win, but we feel like that was such a great starting point as kind of a baseline. Going into the weekend, my mindset for it wasn’t really about the results.

“I wasn’t focused on, ‘Hey, I want to get a podium. I want to go and win.’ I was more focused on going out there and executing, doing my job the best that I could. And then, if good results come after that, then so be it. It was a good weekend for sure.”

“He’s extremely mature for a 16-year-old,” Moore said. “When we tested him back in August, I felt that he had something special and we just need to develop. It’s all brand new to him. Yeah, we are all in this to win together, but we also realize that he has an awful lot to learn, still.

“The level of progression that he is making is very quick. He listens, but he has really sound fundamentals. The Cup Car is not an easy car to drive. When it comes down to it, of all the cars to drive, it’s a hot rod. It’s a thoroughbred racer and it requires some very specialized skills of putting it all together. I think to really be able to put it all together and be the guy to beat, Riley has that potential in him, for sure. We’re going to strive to continue to get there.”

Dickinson certainly announced his presence with authority on his debut weekend in the series in Alabama. But the youngster from New Braunfels, Texas has been on Moore’s radar for quite some time, especially after Dickinson’s driver coach, Derek Eastty, tipped him off.

“I’ve known Derek for 20-25 years and he’s been watching our Cup program,” Moore said. “He’s real big in the karting scene and I told him a few years back that I was looking for some young talent that we could help build the racing culture. I wanted to see some more young Texans get an opportunity to showcase their talents and get the chance to compete on a national level.”

Dickinson first made a name for himself in the karting ranks – especially on tracks local to him near New Braunfels like Harris Hill Raceway and Hill Country Kart Club. He began working with Eastty in early 2018 as he began to make the transition from karts to race cars.

“We’d been working extensively in (Mazda) Miatas, and that was just for me a stepping stone to learn how a car reacts, which is different to a go-kart,” Dickinson said. “Just learning how to manipulate the car, how to just deal with a lot more weight. I was dealing with a 300-pound kart compared to a 2,000-pound car, so for me, that was a steep learning curve.”

Nevertheless, he adapted quickly and began charting a course for the next step of his career. Enter the Porsche GT3 Cup Challenge USA by Yokohama.

“We had been following the series for a little bit,” Dickinson explained. “There were other go-kart drivers who had made their way up into the series, so we were following along because of that. So, whenever we decided to make the next step and we were going through the list of the different series, GT3 Cup just kept on coming up to the front of the list.

“They did their due diligence,” Moore added. “They didn’t just come to me at the end of the offseason. Riley and his dad and Derek came – we had them as our guest when we came back with Zach Robichon (in 2018) at Road America. I introduced them to the series.”

That was almost nine months ago. Since then, some of the names have changed, but the competition is as tough as it’s ever been. If Barber was any indication, drivers like De Angelis, Canadian driver Parker Thompson and Californian Max Root – among others – will provide tough competition all year long. Dickinson and Moore wouldn’t have it any other way.

“I’m going to gain so much invaluable experience throughout this year,” Dickinson said. “That’s also one of the reasons why we chose this series because of the stiff competition throughout the entire series. It doesn’t matter if it’s a practice session, qualy or a race. You’re always having to be aware, just because of the amount of talent that’s in the field.”

“We’ve been looking forward to this for a while,” Moore added. “When we tested last summer, we saw some things in Riley. We knew that he was going to be a contender. For me, personally, the stiffer the competition, the better. This is a development series, and the way we look at this is, if we can continue to push all the young drivers to the next level to where they’re better prepared to make the next step – I mean, I want to see the Americans dominate the world scene when it comes to drivers.”

We’ll get the chance to see if Dickinson takes the next step – which would be to the top step of the podium – this weekend at Mid-Ohio Sports Car Course as part of the Acura Sports Car Challenge at Mid-Ohio for the IMSA WeatherTech SportsCar Championship.