Successful start into the 2019 VLN season for Mühlner Motorsport

A third place and therefor a podium was the starting result for Marcel Hoppe, Jörn Schmidt-Staade and Moritz Kranz in the first race of the 2019 VLN season. 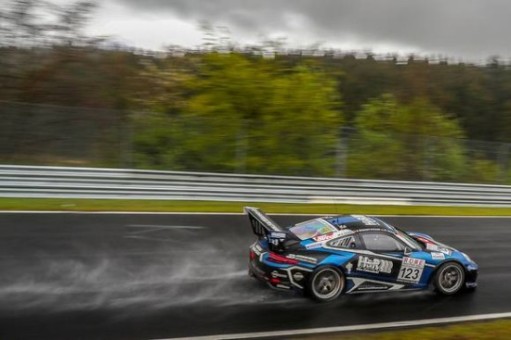 A difficult first race made it impossible for Hoppe, Schmitd-Staade and Kranz to show the full potential of this years driver and car combination.

Pole Position for the second race showed, that the #123 Muehlner Porsche is a force to be recon with. Heavy snow shortly after the start of the second race left race control no choice but to red flag the race, so that the qualifying performance could not be converted into a good race result.

The third VLN race made up for the first two difficult races: fastest lap and leading from start to finish showed the full potential of the H&R Special Springs supported GT3 Cup Porsche!

At the start, Kranz was able to move up to P12 overall in heavy rain and aqua planing, leaving all SP7 and a lot of SP9 cars behind. Kranz was able to create such a big gap in the start stint that Hoppe and Schmidt-Staade had the task to finish the race without incident. With the changing weather conditions, this is easier said than done but both drivers showed excellent performance to finish the race on P1 and secure the first GT3 win of the 2019 VLN season!

Bernhard Mühlner: “The boys did an absolute perfect job today! To bring the car home in one piece in these conditions is a success already but doing it in this style with being fast, reliable and being able to win is a really great performance!”

With the support of Mabanol Premium Motor Oil and H&R Special Springs the #969 is driven by Thorsten Jung, Fidel Leib and Alex Schula. The second car #979 is driven by Michael Rebhan, Nico Menzel and the current champion Moritz Kranz.

For the #969 car, the first race was a difficult one: after a yellow flag infringement in qualification, they had to start from the back of the entire field, a stop&go made it impossible for them to move up further than P6. The sister car #979 had a race long fight with its rivals and was able to secure the win after moving up to P1 with two laps to go.

The second race was a victim of the already mentioned snow.

The third race showed once again, that meticulous work pays off: with both cars being prepared perfectly by Muehlner Motorsport and rain coaching by Moritz Kranz a truly staggering performance was displayed by both cars!

Win for the #979 car of Moritz Kranz and Nico Menzel and also P12 overall and therefor best non-gt3-car and P3 for the #969 car of Thorsten Jung, Fidel Leib and Alex Schula!

Further more, #979 secured the pole position while #969 secured the fastest race lap. Both, pole and fastest lap, are rewared with an extra point each.

Bernhard Mühlner: “That was a perfect start into the season for us! Two wins in two executed races, and a third place in the third race – it does not get much better than this! Moritz and Nico really displayed there talent today with being on P12 overall, best non-gt3-car and even being in front of some of the GT3 cars – a truly perfect race weekend!”