Race 1 for Porsche GT3 Cup Challenge Canada and USA by Yokohama competitors proved to be a race of survival for the 39 drivers and Porsche 911 GT3 Cup cars, and coming out on top was Canadian Roman De Angelis in the No. 79 Mark Motors Racing / Kelly-Moss Road and Race Porsche. 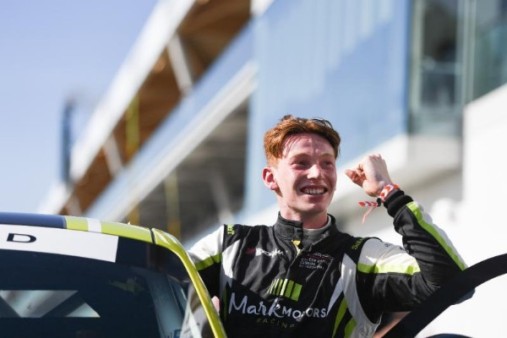 A few laps into the 30-minute race, a series of incidents took place across the track that resulted in a 15-minute full course caution. While De Angelis – who is competing for points in both GT3 Cup Challenge Canada and GT3 Cup Challenge USA at this joint race weekend – led flag-to-flag, he admitted to mistakes that kept the race for the lead closer than it should have been.

“It’s never easy,” said De Angelis. “Initially on the start, we had pretty good pace. We set the car up so it was good towards the end, but it was struggling at the beginning to pull a gap. It seemed like – and obviously not and I hope everyone’s okay – but everyone kind of crashed on one lap and had a lot of clean up to do.

“When it went green again, I kind of made a stupid mistake braking into (Turn) 1 and made the same mistake into (Turn) 3. I locked the front tires, so I had a flat spot on the left and right front and I had to deal with that for the five remaining laps, so that didn’t make easy. We had a good car though with Kelly-Moss and Mark Motors which made it cool.”

Thompson faced a stiff battle in the closing minutes with fellow GT3 Cup Challenge USA competitors Maxwell Root in the No. 7 Wright Motorsports Porsche and teammate Sean McAlister with JDX in the No. 11 Porsche.

Ultimately, Thompson was able to hold off the duo while Root and McAlister finished third and fourth, respectively. This is also the first trip to Circuit Gilles Villeneuve for Root and McAlister, who have both been recipients of the IMSA Hurley Haywood GT3 Cup scholarship – Root in 2018 and McAlister this year.

In the Platinum Masters GT3 Cup Challenge USA class, it was a first career victory for Bill Smith in the No. 42 Topp Racing Porsche over teammate David Baker in Topp Racing’s No. 56 entry.

“I’m really thrilled with the result,” said Smith. “I had a pretty tough start because I had never been to this track before and on my first full lap of practice, I happened to kiss the wall and bent the control arm. My practice session was pretty rough and qualifying wasn’t much better.

“I started the day with low expectations, but as things unfolded and opportunities presented themselves, I was able to move up. My teammate unfortunately was losing a tire, so I was able to get him at the last lap just before the last corner. In the event, we’re thrilled to have the 1 and 2 positions for Topp Racing.”

At the right spot at the right time to win the GT3 Cup Challenge USA Gold Class was Kurt Fazekas in the No. 52 Kelly-Moss Porsche. Fazekas was running second to polesitter Sebastian Carazo in the NGT Motorsports’ No. 27 entry, who was slowed by an incident and lost time and positions to eventual winner Fazekas.

“What a great venue and we’re so fortunate to race with the likes of Formula One drivers, the greatest drivers in the world and hopefully put on a good show,” said Fazekas. “Just too bad there was so much carnage out there. It kind of took away, I think, from the spectacle of the GT3 Cup series because it’s such a great, competitive series.”

Earning Yokohama Tire’s Hard Charger Award in the Platinum Class for gaining the most positions in the race was Juan Manuel Fayen driving the No. 19 FMS Motorsport Porsche.

Cirone’s podium finish also solidified his second Platinum Masters victory in GT3 Cup Challenge Canada and a big swing in the point standings for that championship, as fellow Masters competitors Alan Metni in the No. 99 Kelly-Moss/AM Motorsports Porsche and Etienne Borgeat in the No. 2 Lauzon Autosport Porsche were involved in the series of incidents at the beginning of the race.

Jeff Kingsley – winner of the first race of the season at Canadian Tire Motorsport Park last month – in the No. 16 Policaro Motorsports entry finished fourth ahead of former teammate Michael Di Meo, who now competes in OpenRoad Racing’s No. 96 Porsche.

While it was smiles for some GT3 Cup Challenge Canada competitors, others found themselves walking away from a difficult race.

Quebeckers Borgeat and his Lauzon Autosport teammate Patrick Dussault in the No. 77 were both involved in separate incidents at the start of the race. While Dussault was able to continue to a ninth-place finish in GT3 Cup Challenge Canada, Borgeat was forced to retire with a heavily damaged racecar.
Another Quebecker, Jean Audet – piloting the No. 67 Grand TIMES Hotel Porsche with an IMSA 50th anniversary livery – suffered a similar fate during the race, being bumped and forced off track by another competitor momentarily. It was enough to relegate Audet’s Porsche to the back of the field.