Porsche factory race teams and drivers are back from Europe and ready to resume their pursuit of IMSA WeatherTech SportsCar Championships in the GTLM and GTD classes. The Sahlen’s Six Hours of The Glen, scheduled for June 30, is the fourth round of the IMSA Championship for both classes and is the first of three races in four weekends for the programs in North America’s premier sports car racing series. Five Porsche-built race cars – two in the factory-focused GTLM class and three in the customer Pro-Am style GTD category – come to the 3.4-mile, 11-turn classic race course in Watkins Glen, New York with a focus of keeping the momentum from a three-race win-streak in GTLM and a podium finish at Detroit for the customer Porsche 911 GT3 R race car. This North American success comes in addition to international achievements with recent FIA World Endurance Championship (WEC) titles in the LMGTE-Pro and LMGTE-Am Manufacturer, Team and Driver categories as well as class wins at the back-to-back 24 hour classics of Le Mans and Nürburgring. 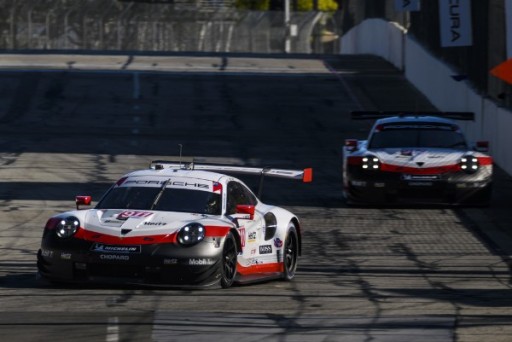 Entering the six-hour endurance classic, the No. 912 Porsche GT Team with Earl Bamber (New Zealand) and Laurens Vanthoor (Belgium) sharing driving duties behind the wheel of the Porsche 911 RSR factory race car, lead the GTLM points championship for Drivers, Teams and Manufacturers. After four rounds of the full WeatherTech championship, #Bamthor, as the pairing has popularly been named, sits on top of the Drivers’ Championship having won the previous two races on the streets of Long Beach and the Mid-Ohio Sports Car Course. Their team car, the No. 911 Porsche GT Team Porsche 911 RSR driven by Patrick Pilet (France) and Nick Tandy (Great Britain) earned the Mobil 1 Twelve Hours of Sebring GTLM class win and currently sit in third-place in the class championship.

At six-hours in length, the race in the Finger Lakes region of New York is the fourth-longest event on the WeatherTech calendar and joins the Rolex 24 At Daytona, Sebring and the 10-hour Petit Le Mans – scheduled at Road Atlanta at the season’s end – as part of IMSA’s Michelin Endurance Cup “championship within a championship”. The four “long” races make up a sub-championship to crown the strongest drivers, teams and automobile makes in a sport best known for its grueling around the clock events. Entering the third of the four enduros, Porsche sits atop the Manufacturer’s standings in the Michelin Endurance Cup with the 911 RSR while the Porsche GT Team is first and third in the prestigious championship with the Nos. 911 and 912 respectively. Pilet, Tandy and Frédéric Makowiecki (France) lead the Drivers’ chase with Bamber, Vanthoor and Mathieu Jaminet (France) tied for third-place.

Highlighting the GTLM class at Watkins Glen is the return of the Brumos Racing-inspired livery on the pair of the “woks” team Porsche 911 RSR race cars. The Nos. 911 and 912 will carry the red and blue Brumos “sweeps” and racing stripes – formed by interlocking the number “59” – for this weekend’s race as well as the July 7 event at Canadian Tire Motorsport Park (CTMP) in Bowmanville, Ontario, Canada. Having donned the traditional corporate red, white and black for victories at Long Beach and Mid-Ohio, the Brumos colors were brought back to celebrate Porsche spokesman and longtime Brumos driver Hurley Haywood (St. Augustine, Florida) as Honorary Grand Marshall for this year’s 24 Hours of Le Mans. The CORE autosport-run Porsche factory team continues with the colors for the next two weekends to celebrate Haywood’s golden anniversary as a professional race car driver and IMSA’s 50th year as a sanctioning body. Haywood made his first professional start in a Brumos Porsche 911 T at the 1969 Six Hours of The Glen. He and co-driver Peter Gregg ran to a class victory.

The Sahlen’s Six Hours of The Glen will take the green flag at 9:45 a.m. Eastern Time on Sunday, June 30.