Ayhancan Güven (martinet by ALMÉRAS) has scored the perfect starting position for round four of the Porsche Mobil 1 Supercup: During Saturday’s qualifying, the Turk turned the fastest lap in 2:02.288 minutes at the Silverstone Circuit in England. “This is my first race weekend at Silverstone in my debut Supercup season – pole position is a truly surprising result. Of course my goal for Sunday is to win,” said Güven, who is the first Turkish driver ever in the international one-make cup to post pole position. Florian Latorre (F/Fach Auto Tech) secured the second grid spot ahead of Porsche Junior Jaxon Evans (NZ/Fach Auto Tech). 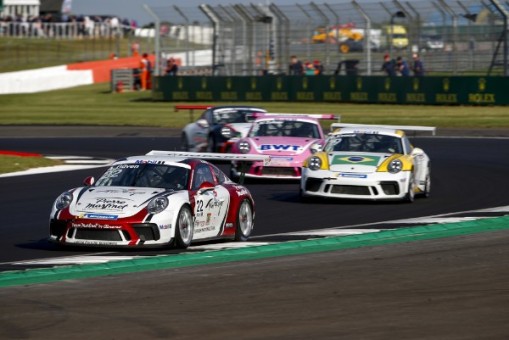 The 32-strong field treated spectators to an action-packed qualifying in their 485 hp Porsche 911 GT3 Cup race cars, with a turbulent final phase. Halfway through the 30-minute session, Larry ten Voorde (NL/MRS GT-Racing) topped the timesheets. Donning fresh tyres, the drivers set one best time after the other in the final minutes on storied racetrack north of London. With four minutes left on the clock, Evans posted the quickest time, followed by Latorre, who was then shoved off pole by Güven in the last seconds. Only 0.07 seconds separated Latorre from the pole-sitter – thus the Frenchman shares the front row with Güven. “My lap was really good up to the last corner, but then I made a slight mistake and that cost me the pole. I won here last year; I really like this racetrack,” explained Latorre.

Latorre’s teammate Evans, who turned his fastest lap in 2:02.517 minutes, was delighted with his best qualifying position so far. “This result shows me that I have the speed. I feel good and optimistic for the race. It would be fantastic to achieve my first Supercup podium,” said the Porsche Junior from New Zealand. The fourth grid position is occupied by Mikkel Pedersen (DK/Dinamic Motorsport) ahead of ten Voorde.

Porsche Junior Julien Andlauer (BWT Lechner Racing) turned the sixth fastest qualifying time. “My fastest lap was annulled because I went too wide off the track. That’s really annoying. My aim for Sunday is to earn as many points as possible towards the championship,” said the Frenchman. Lining up behind the 20-year-old on the grid are Al Faisal Al Zubair (OM/Lechner Racing Middle East) and Joey Mawson (AUS/Team Australia). Less than a second separated the first 18 drivers on the time sheets. The fastest Pro-Am driver was the Norwegian Roar Lindland (pierre martinet by ALMÉRAS).

The VIP vehicle of Porsche AG will race this weekend for the first time this season. At the wheel of the nine-eleven is Chris Hoy, the six-time Olympic gold medallist in track cycling. The Scotsman qualified on 26th. “The session was great fun. Compared to free practice, I managed to improve by around two seconds – to be honest, I didn’t expect that,” said Hoy. The best British driver was Daniel Harper (JTR) on P11. Aside from the 18-year-old and Hoy, three more British racing drivers tackle the race on Sunday: Josh Webster (Team Project 1 – Fach), George Gamble (JTR) and Sebastian Perez (JTR).

Round four of the Porsche Mobil 1 Supercup gets underway on Sunday at 11.15am local time.