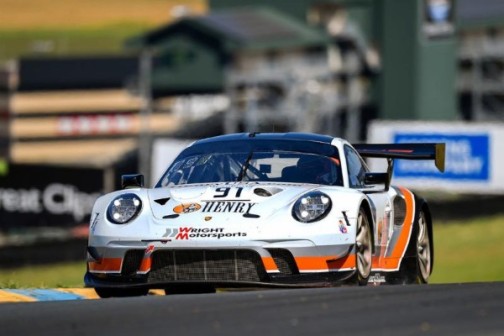 Bringing You Up to Speed:
This week’s GT-only event will be the first of two IMSA WeatherTech Championship rounds that Wright Motorsports will contest in; the second being the next round at Road America, where Imperato will be paired with Dennis Olsen.

This marks the Batavia Ohio-based team’s return to GTD competition for the first time since 2018- where they campaigned the full season with a Porsche 911 GT3 R for Patrick Long and Christina Nielsen.

Technical Analysis: Lime Rock Park
Lime Rock Park offers very little time for rest, with the 1.474 mile, seven turn road course producing lap times under one minute. The condensed two-day schedule will put added pressure on the drivers to get up to speed and the teams to find the perfect setup for the 2-hour, 40-minute event.

“Lime Rock Park, or ‘the bullring’ is effectively an oval with a left hand corner,” said Wright Motorsports Technical Director, Bob Viglione. “It has a mix of both high and low speed turns and good elevation change so you need to have both mechanical and aero grip. Tire wear is also a premium here so it has everything for an engineering challenge in such a small circuit”

Experience: Wright Motorsports at Lime Rock Park
IMSA Porsche GT3 Cup Challenge graduate, Imperato, will be making his GTD debut alongside Porsche Young Professional, Campbell, who made his first IMSA appearance at this year’s Rolex 24. While this will be a new course for both drivers, the duo has already proven to be a strong force, earning multiple podiums together racing Porsche 911 GT3 Rs in other championships.

It was one year ago from this week that Wright Motorsports claimed the GTD class pole position with Patrick Long behind the wheel of a Porsche 911 GT3 R. The team lead the bulk of the race until an issue outside of their control hindered their shot at the podium. The group looks to build off of their success, already barring a slew of Lime Rock wins in North American GT3 competition.

“I’m really looking forward to running a few IMSA Weather Tech Championship races this season. Running in SRO America has prepared us for things like drivers changes and pit stops. The biggest difference is going to be dealing with multi-class traffic. It will be a great learning experience. I feel confident we will have some good results.”

“I’m very excited to extend my season with Anthony and Wright Motorsports. It will be a bit of a different setting in IMSA, but I’m really looking forward to joining Anthony for some longer races and hope to do a few more of them this year. I can’t wait to get back to America, especially for my first visit to Lime Rock Park. It’s such a special little track and Porsche’s had some great success there in the past, so we’ll look to do the same. Lots of exciting times coming up and I can’t wait to get back to it.”