Motorbase Performance duo Lewis Plato and Dan Vaughan have their eyes on the prize as the second half of the Porsche Carrera Cup GB season gets underway at Thruxton this coming weekend (August 17-18). 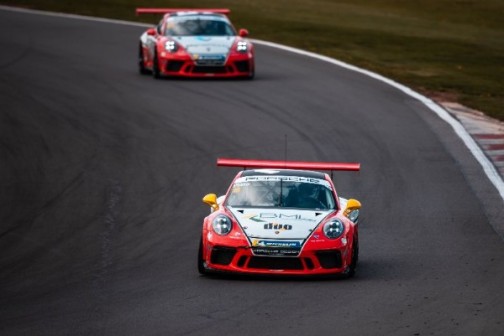 Returning to the high-speed circuit for the first time since 2014, the battle for the Carrera Cup GB title honours is set to alight once more with Plato in hot contention to close the gap to the current championship leader.

Both drivers will take on the formidable circuit for the first time this weekend, with the Porsche ‘Type 911’ 911 GT3 machines set to hit speeds of around 170mph. Plato, who currently lies second in the standings, will be looking to add to his Pro Class victory from Croft to close the 20-point gap to Harper.

Vaughan’s Pro-Category journey continues after making the step-up from his rookie Pro-Am season in 2018. After taking a second-place podium at Croft, the New-Forest-based racer is confident of putting his recent learnings to good use at his home circuit this weekend.

#11 Lewis Plato:
“We need to go there and win there are no two ways about it. I’ve never been on the track in a race car so it’s a bit of an unknown quantity, but I’m looking forward to it. We’re a fair chunk off leader Harper, but it’s definitely still doable.

“The car has been good this year, but I don’t think we’ve hit that optimal point yet. We recently tested at Silverstone and made some progress there, so hopefully, that will pay off this weekend. We need a good, solid weekend to stay in the hunt”

#55 Dan Vaughan:
“I’m looking forward to getting cracking with the second-half of the season. I think the first-half results were inevitable with the step up to the Pro-Class. We could have had a few better results without doing a lot more, but we’ve got some good learning behind us now. We had a recent test day at Silverstone where I went back to basics rather than chasing data. I think that will help me at Thruxton. I need to just relax a bit more in the car and not overthink things as much.

“I feel pretty confident about the weekend. We usually do well at the high-speed circuits. We’ve just got to make sure that we’re dialled into the car on Friday.”

Both drivers will get to tackle the Hampshire circuit for the first time during Friday’s test and free practice sessions, before Saturday’s (17 August) 30-minute qualifying session at 14.15.