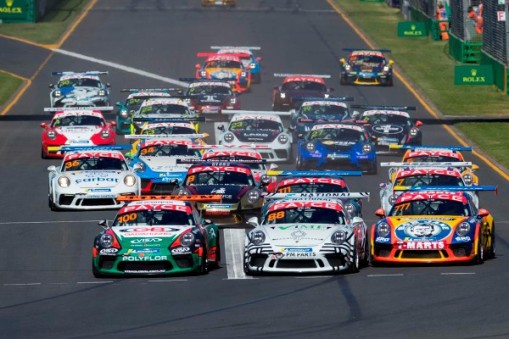 After two events at the top end of the country, the Porsche PAYCE Carrera Cup Australia teams head south to the riverside town of Tailem Bend. The quaint, country town flanks the banks of the Murray River and is located less than 100km to the south-east of Adelaide.

Last year, the success of the inaugural Tailem Bend event saw a welcome injection of revenue to the rural area with The Bend Motorsport Park becoming the 17th venue to host a round of Porsche PAYCE Carrera Cup Australia since the series began in 2003. The circuit configuration which the Porsche 9111 GT3 Cup cars will tackle this weekend, is the third-longest on the 2019 calendar at 4.95km – only Bathurst (6.213km) and Albert Park (5.303km) are longer.

Last year’s inaugural round was won by South Australian-local Michael Almond, who scored two race wins on his way to the round victory. Although David Wall crossed the line first in the first race last year, a five-second penalty incurred when passing Porsche Junior Jaxon Evans, dropped him to second place in the final results, handing Almond the inaugural Porsche PAYCE Carrera Cup Australia race win at the circuit.

The sixth round of the 2019 championship is also the120th in the history of the series – which this year also celebrates its 15th year of competition. Five different round winners have emerged from the first five Porsche PAYCE Carrera Cup Australia rounds so far this season with Nick McBride (Adelaide), Dale Wood (Albert Park), Jordan Love (Phillip Island), Michael Almond (Hidden Valley) and Cooper Murray (Townsville) all sharing round victories. This is the first time in series history that this has occurred and never before has the category witnessed such a tussle at the front of the field.

Dale Wood has never been off the podium this year and the Sonic Racing driver’s pace and consistency have seen his Polyflor-liveried 911 build a 201-point advantage over Warren Luff in second place overall. With more than a maximum round (180points) buffer in the championship, Wood’s lead is significant for several reasons.

Only three rounds of the championship remain, so every race from here on in is vital for the chasing pack to make up the deficit. Then factor in the constant improvement and pace of Michelin Juniors like Cooper Murray and Cameron Hill into the mix – as they continue to steal valuable points from more seasoned Pros in recent rounds – and the Tailem Bend round becomes massively important in the championship title race.

Lago’s record-setting pace (and outright pole) in Townsville last time out making him the man to beat heading into Round 6, as arch-rival Anthony Gilbertson takes a sabbatical this weekend due to work commitments. Along with the ever-present Adrian Flack, Lago’s biggest competition is likely to be from Michelin GT3 Cup Challenge Pro-Am frontrunners Sam Shahin and Brett Boulton.

The Bend Motorsport Park marks Boulton’s Porsche PAYCE Carrera Cup Australia debut, becoming the 211th driver to compete in the series history. Other wildcards to watch in the Pro and Pro-Am field include father and son pairing of Brenton and Stephen Grove.

While Brenton is no stranger to the category having risen through the Porsche Motorsport pyramid, Stephen Grove returns to chalk up his 55th round – moving him to fourth on the all-time round starts list in Porsche PAYCE Carrera Cup Australia history.

Both Grove Snr and Jnr will be in Ashley Seward Motorsport prepared Porsche 911 GT3 Cup cars and are treating the weekend as part of their preparation for Round 7 of the Porsche Mobil 1 Supercup race at the famous Spa-Francorchamps circuit the following weekend. In doing so, the pair become the first Australian father and son pairing to compete in the global Porsche category together in the series’ history