Max Root is no stranger to the front of the Porsche GT3 Cup Challenge USA by Yokohama field at VIRginia International Raceway, as he led the race here last year in the No. 7 Wright Motorsports Porsche 911 GT3 Cup machine. 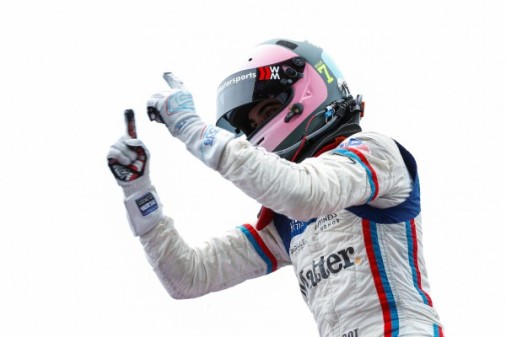 But Root paid his first visit to the top step of the podium Saturday in challenging conditions during the first race of the weekend at the 3.27-mile, 17-turn circuit. As the race was declared “wet” by IMSA officials, every car in the field was running on Yokohama rain tires, but portions of the track dried throughout the 45-minute race.

Root managed to chase down points leader Roman De Angelis in the No. 79 Kelly-Moss Road and Race Porsche – who started the race from the pole position and held the lead from the drop of the green flag – with just over three minutes remaining. Once the 20-year-old Californian got the lead, he quickly checked out, taking the checkered flag 35.889 seconds ahead of De Angelis to get his first win.

“It was an amazing race,” Root said. “Those were interesting conditions, something we could have never predicted, but we made those Yokohamas go as far as they could. Driving on a dry/wet track with wet tires was interesting. I couldn’t have done it without the Wright Motorsports guys and all my sponsors.”

With the runner-up result, De Angelis still holds a comfortable 65-point lead, 379-314, over Root in the season championship standings in the Platinum Cup class for Porsche 911 GT3 Cup Cars built between 2017 and 2019. De Angelis now has finished either first or second in all 11 races to date this year.

Fred Poordad made it two Wright Motorsports entries on the overall podium in the No. 20 Porsche and took the class victory in the Platinum Masters class for drivers 45 years of age or over. Poordad – who also won a race here at VIR last year – also earned the race’s Yokohama Hard Charger Award as the Platinum Cup driver who improved the most positions from start to finish. He started 15th on the overall grid.

“We had a disappointing qualifying, at least I did,” Poordad said. “I thought, ‘Wow, from where we’re starting there’s not a lot I can do but keep it clean.’ But we plugged away one car at a time. Wright Motorsports gave me an incredible car today. It felt very planted. It didn’t even feel like it was wet out there. Hats off to Yokohama Tires as well, because those tires lasted me the entire race. I felt like I could have gone another 20 minutes on them.

“I’m happy today. Happy for Wright Motorsports with a couple of podiums and happy for my teammates as well.”

Jeff Mosing finished second in Platinum Masters and fourth overall in the No. 68 Topp Racing Porsche 911 GT3 Cup machine. Alan Metni finished third in the Platinum Masters class in the No. 99 AM Motorsports/Kelly-Moss Porsche and now leads the class point standings by 21 points, 348-327, over Poordad.

Rob Ferriol drove the No. 5 Moorespeed entry to his second career victory in the Gold Cup class for Porsche 911 GT3 Cup machines built between 2014 and 2016. Ferriol took the lead when class points leader Sebastian Carazo spun in the Oak Tree Turn with just under 17 minutes remaining in the race.

Ferriol then held off Carazo – especially through an intense final lap – to win by 0.365 seconds.

“My plan for the day was conservative,” Ferriol said. “Bring the car home. Make it to the checkered. These rain races, things happen. So, I figured I’d keep it close to the front and stay consistent and smart, and maybe the race would come to me. And it did.”

Carazo ended up second and continues to lead the Gold Cup standings by 38 points, 371-333, over Ferriol. Efrin Castro finished third in Gold Cup aboard the No. 65 ACI Motorsports Porsche.