Big excitement for Porsche Junior Jaxon Evans (Fach Auto Tech): In qualifying for the eighth round of the Porsche Mobil 1 Supercup on Saturday, the New Zealander posted the fastest time: “I can’t really find the words to describe how I’m feeling. The result simply makes me happy. The first chicane here is really tight, so the pole is pretty important to reduce the risk of colliding with another vehicle after the start,” said Evans. Ayhancan Güven (TR/martinet by ALMÉRAS) takes up the race alongside Evans on the first grid row in his 485 hp Porsche 911 GT3 Cup. The third grid spot went to Larry ten Voorde (NL/MRS GT-Racing). 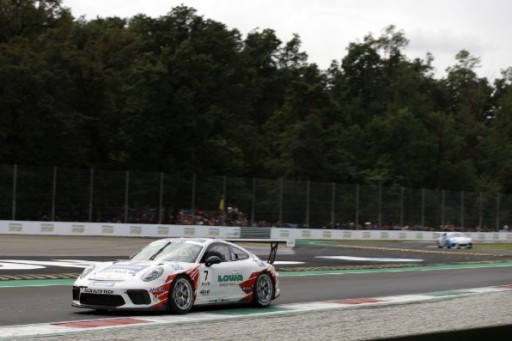 A total of 32 drivers fought for the best starting positions in qualifying. The session on the racetrack north of Milan was packed with suspense from the first moment, with several different names appearing on the top of the time sheets. Mikkel Pedersen (DK/Dinamic Motorsport) was the first to set the fastest time, followed by Evans and then Güven. Switching to a fresh set of tyres, a turbulent closing phase followed: with five minutes left to the session, Pedersen’s name again appeared at the top of the monitor, with Ammermüller replacing him shortly afterwards. Rookie Güven undercut the time of his rivals and turned his fastest lap in 1:49.295 minutes. Only Porsche Junior Evans managed a quicker time – beating him by 0.043 seconds. Güven explained: “I managed two super laps. I would have preferred pole position, of course, but I’m still really excited about racing here in front of so many fans. The stretch to the first corner in relatively long, hence it’s decisive to get away well at the start.”

Ten Voorde takes up Sunday’s race from the second grid row. His time of 1:49,347 minutes represented the 22-year-old’s personal best time. Ammermüller and Dylan Pereira (L/Momo Megatron Lechner Racing) rounded off the top five on the 5.793 kilometre high-speed circuit. Lining up behind them are Pedersen, Joey Mawson (AUS/Team Australia) and Al Faisal Al Zubair (OM/Lechner Racing Middle East). Porsche Junior and series leader Julien Andlauer (BWT Lechner Racing) claimed the 13th grid spot. “To be honest, I’m pretty disappointed. The track actually offers good chances to overtake with its long straight. But as a team, we now have to take a good look at what we can optimise,” said the Frenchman.

Gianmarco Quaresmini concluded the session on 14th as the fastest Italian. The 23-year-old comes from Brescia and drives for Dinamic Motorsport. Alberto Cerqui (Preseglie) also competes in front of home crowds for the squad based in Reggio Emilia. The fastest time in the ProAm category again went to Roar Lindland (N/pierre martinet by ALMÉRAS) ahead of Philipp Sager (A/Dinamic Motorsport) and Clement Mateu (F/pierre martinet by ALMÉRAS). Round eight of the Porsche Mobil 1 Supercup gets underway on Sunday at 12.05pm local time. Eurosport televises the race live in over 60 countries. Sky covers the international one-make cup in Great Britain and Italy, with Sport 1 broadcasting in Germany. Fans can also watch the race live via the official Formula 1 streaming service (F1 TV).