Championship leader Porsche is eager to continue its impressive streak in the IMSA WeatherTech SportsCar Championship at the penultimate round of the season. At the upcoming race on the Laguna Seca Raceway (USA), the factory squad face a special challenge with its two ca. 510 hp Porsche 911 RSR. The tradition-steeped circuit in California is the only racetrack on the calendar where victory has so far evaded Porsche since the factory returned to the North American sports car series in 2014. In the GTD class, Pfaff Motorsports and Park Place Motorsports will each field a Porsche 911 GT3 R. 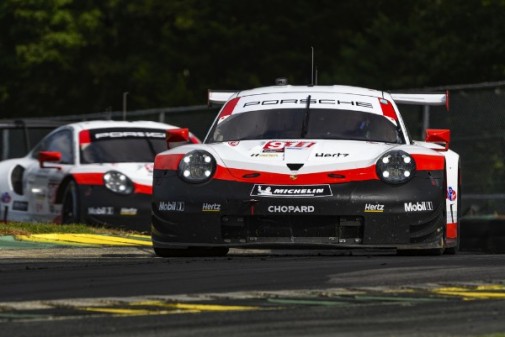 The race
The Laguna Seca Raceway in the dunes inland from the Monterey coast is 3.601 kilometres long and features eleven corners. The most famous passage is the Corkscrew. This tight, spectacular and almost blind combination of curves after a crest has often been the scene of thrilling overtaking manoeuvres. Per lap, drivers have to cope with a 55-metre elevation change. Tyre wear and strategies were the key factors in the races on this track, which was built in 1957. In 2018, Earl Bamber (New Zealand) and Laurens Vanthoor (Belgium) finished second at Laguna Seca.

The Porsche drivers
Patrick Pilet (France) and Nick Tandy (Great Britain) share the No. 911 Porsche 911 RSR. So far this season, the pair has won the races in Sebring, Watkins Glen and most recently at the Virginia International Raceway. Pilet und Tandy currently rank second in the drivers’ classification. Their works driver colleagues in the No. 912 sister car, Earl Bamber (New Zealand) and Laurens Vanthoor (Belgium), lead the class with an eleven-point advantage after victories at Long Beach, Mid-Ohio and Bowmanville, Canada.

In the GTD class, a championship decision will be made at Laguna Seca. The upcoming race marks the final round of the Sprint Cup category. Heading to the decider round in California, Porsche ranks first in the manufacturers’ classification, with the Canadian Zacharie Robichon leading the drivers’ category. Driving for Pfaff Motorsports, Robichon shares the No. 9 Porsche 911 GT3 R with his compatriot Scott Hargrove. The cockpit of the identical 500+hp GT3 racer from Weissach campaigned by Park Place Motorsports (No. 73) is shared by works driver Patrick Long (USA) with the American Patrick Lindsey.

The Porsche vehicles
The Porsche 911 RSR, which is based on the high-performance 911 GT3 RS* road-going sports car, has undergone further optimisation primarily in the suspension setup for its third racing season in North America. Depending on the size of the restrictor, the engine, which is positioned in front of the rear axle, puts out around 375 kW (510 hp). The large rear diffuser combined with a top-mounted rear wing provides aerodynamic efficiency and significant downforce.

The 911 GT3 R fielded by Porsche customer teams was newly developed for the 2019 season and is also based on the road-legal 911 GT3 RS*. Improvements in the areas of aerodynamics and kinematics were systematically implemented from the insights garnered from the many race outings of its predecessor. The six-cylinder engine in the rear of the GT3 racing vehicle produces over 368 kW (500 hp).

Comments before the race
Pascal Zurlinden (Director Factory Motorsport): “We’re heading to Laguna Seca with an extra dose of motivation. The Californian racetrack is the only one on the calendar where we haven’t yet won with the Porsche 911 RSR. That should change next weekend. Our job will be anything but easy, but we’re more than happy to take on this challenge.”

Steffen Höllwarth (Head of Operations IMSA Championship): “There are a number of factors that are decisive for a successful outing at Laguna Seca: the track has several long, semi-fast turns. The setup for these passages has to be perfect, because even a slight understeer can lead to a significant loss of time. The track surface is really rough and it’s often covered with sand from the surrounding dunes. This puts the tyres under enormous stress. It’s important to drive a consistently fast pace over the entire stint. And last but not least, tactics play a critical role. There’s a lot of leeway for different strategies in this race. It’s important to correctly anticipate the safety car phases and respond astutely.”

Patrick Pilet (Porsche 911 RSR #911): “Laguna Seca is one of my all-time favourite racetracks in the USA. Set against the picturesque landscape of the Pacific, the racetrack has its challenges. Tyre wear is a determining factor in the race. We’ve often been strong on the Californian racetrack but we’ve never won there. We’d like to change that next weekend. If our car wins, the situation in the drivers’ championship will get really exciting.”

Nick Tandy (Porsche 911 RSR #911): “We’re heading onto the finish straight of the championship. Laguna Seca is the penultimate race on the calendar. As far as the rankings are concerned, our goal is to score as many points as possible and not risk too much. If we can achieve solid results at the two remaining races or even bring home more victories, then Porsche will be virtually unbeatable in the championship.”

Earl Bamber (Porsche 911 RSR #912): “I’m really looking forward to racing on this fantastic circuit in California. We were strong there last year and scored second. It would be wonderful if we could secure another podium place this year. It would help Porsche to take another important step towards the championship. Plus, it would put Laurens and me in an even better position in the fight for the drivers’ title.”

Laurens Vanthoor (Porsche 911 RSR #912): “I got a chance to rest over the past couple of weeks, so I’m now excited to tackle the race. We land in San Francisco, we see the famous Golden Gate Bridge and then drive along the cliffs and beaches towards Monterey – a stunning setting. And the racetrack is just as cool. For us, the penultimate race of the season is about consolidating our position in the championship or, preferably, to extend our lead. We don’t have to risk everything, but of course we’d like to win.”

Zacharie Robichon (Porsche 911 GT3 R #9): “The Laguna Seca racetrack is completely new terrain for me. I’m really curious about this legendary course. In the Sprint Cup Championship I’m leading by just one point as we head to the final race. We have to do everything we can to get to the very front. Our team is well prepared and the car is fast in all conditions. If we were to win the trophy, it would be a fantastic achievement for the team and for me personally.”

Patrick Long (Porsche 911 GT3 R #73): “For me as a Californian, Laguna Seca is a home race. For that reason alone, the upcoming event has a very special meaning. Porsche has always performed well on this storied racetrack. However, the competition in the GTD class this year is tougher than ever before. Everything has to come together perfectly otherwise you have no chance for a top result. If we manage to finish the first half of the race well, then we could possibly even finish on the podium.”