As soon as he climbed from his No. 79 Kelly-Moss Road and Race Porsche 911 GT3 Cup machine after Sunday’s second race of the Porsche GT3 Cup Challenge USA by Yokohama doubleheader at WeatherTech Raceway Laguna Seca, Roman De Angelis held up both hands, with all 10 fingers extended. 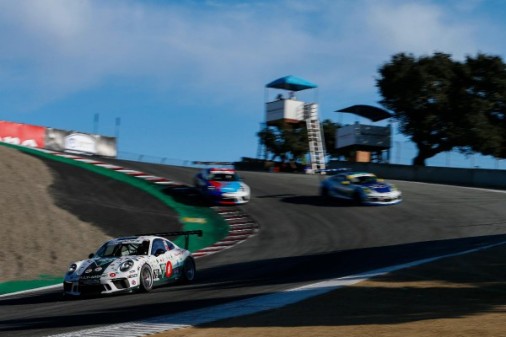 That’s because the 18-year-old Canadian had just parked his car in victory lane for the 10th time in a dominating 2019 season. With just under 10 minutes remaining in the 45-minute race, De Angelis took advantage as slower traffic boxed in race leader and polesitter Max Root in the No. 7 Wright Motorsports Porsche to take the lead coming out of Turn 5.

He then pulled away before a full-course caution came out for an incident in Turn 3 involving the No. 18 of Richard Edge and the No. 19 of Juan Manuel Fayen. Both drivers were evaluated and released from the care center, but the race ended under full-course caution, giving De Angelis his first victory since sweeping both races of the doubleheader at Road America last month.

The victory enabled De Angelis to extend his lead to 58 points, 474-416, over Root in the driver standings for the Platinum Cup class for Porsche 911 GT3 Cup cars built between 2017 and 2019. De Angelis can clinch the 2019 title if his lead is 35 points or greater following the next race at Michelin Raceway Road Atlanta on Thursday, Oct. 10.

“I think it was pretty important to get that one off my chest,” De Angelis said. “Max had a really good run there with three races in a row. We had a tire go in (Race 1 at) VIRginia and then I made a mistake myself in Race 2. Then, yesterday he just outpaced us.

“I think it shows a lot. Coming into the weekend, I had never been here and the guys had never with the Gen 2 GT3 Cup car. We put in a lot of work last night to figure out what the issues were from yesterday and clearly it paid off for us.”

Root led a race-high 23 laps in what was a 30-lap race, but his winning streak was snapped at three consecutive races. Nevertheless, he came home in second place for his 11th podium result of the season and fifth in a row.

Canadian driver Jeff Kingsley completed the podium with a third-place showing in the No. 3 JDX Racing Porsche. It was Kingsley’s third podium of the season and first since a second-place result in Race 1 at Road America.

In the Platinum Masters class for drivers 45 years of age and over, Alan Metni returned to victory lane in the No. 99 Kelly-Moss/AM Motorsports Porsche for the first time since Race 2 at Road America last month. Metni held the Platinum Masters lead throughout the race en route to his sixth class win of the season.

“It’s great to be here,” Metni said. “Laguna’s a wonderful place. I love this track. I’m really, really happy that my daughters, Layla and Ava, and my wife, Meryl, came to watch me. It made it a perfect weekend, so I’m quite happy.

“I’ve made a couple of really large, unforced errors in the last few stops, and it was starting to bug me. It’s really nice to get all the way through a race without any losses in focus.”

In the Gold Cup class for 911 GT3 Cup cars built between 2014 and 2016, Sebastian Carazo led every lap in the No. 27 NGT Motorsport Porsche to earn his 10th victory of the season. Carazo now has finished on the podium in all 14 races so far this season, and leads the Gold Cup standings by 47 points, 476-429, over Rob Ferriol in the No. 5 Moorespeed Porsche.

An added bonus for Carazo came in the form of the Yokohama Hard Charger Award as the Gold Cup driver who improved the most overall positions from start to finish in Race 2. Carazo finished ninth overall after starting 10th.

“It was a great weekend,” said Carazo. “I’m really thankful for (team owner) Ramez (Wahab) and NGT. All the guys in the crew gave me a great car from the start of the weekend. We were dominating since the first practice. It was a great weekend. I love the track. It was my first time here and I loved it. Great people, great crowd showing up for the Indy race. It was really great them having us here and giving us a great event.

“It’s also my first time winning a Hard Charger Award. It’s good to come out of a weekend winning a free set of tires.”

Ferriol finished second, followed by Curt Swearingin, who finished third in the No. 17 ACI Motorsports Porsche. Both drivers finished in the same positions in Saturday’s race as well.

Next up for the Porsche GT3 Cup Challenge USA by Yokohama is the season-ending doubleheader at Michelin Raceway Road Atlanta as part of the Motul Petit Le Mans event week on Oct. 9-12. The first race of the weekend is Thursday, Oct. 10 with the season finale set for Friday, Oct. 11.