The fight for the Porsche Carrera Cup Deutschland title has been decided: At a gripping season finale on the Sachsenring, Porsche Junior Julien Andlauer (BWT Lechner Racing) claimed ninth place. With this result, the Frenchman beat Michael Ammermüller (D/BWT Lechner Racing) in the duel for the championship by just 2.5 points. “What a crazy finale. My plan was to drive a flawless race without risking too much. Unfortunately I made a mistake, but I’m now simply over the moon about the title,” said Andlauer. Larry ten Voorde (Overdrive Racing by Huber) from the Netherlands won round 16 on Sunday at the wheel of his 485 hp Porsche 911 GT3 Cup. The other podium steps were occupied by Ammermüller and Igor Walilko (PL/Overdrive Racing by Huber). 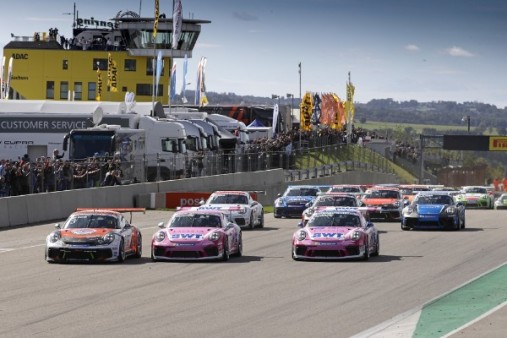 “Winding up the season with a victory feels great. Michael Ammermüller was close on my bumper in the penultimate lap, but I stayed cool,” said ten Voorde. The driver from the Dutch town of Boekelo laid the foundation for his fifth win of the season at the start. The 22-year-old took up the race from the second grid spot and overtook Ammermüller in the first corner. While ten Voorde initially pulled clear of the field, Ammermüller came under pressure from Walilko, however the seasoned specialist skilfully defended himself in the first laps, shook off his competitors and gradually closed in on the leading Huber driver. A victory would have handed Ammermüller the title, however ten Voorde maintained his front spot over 19 laps to cross the finish line first. “Honestly, I didn’t think the championship would end up so close. Unfortunately I missed out on finishing in first place, but it’s almost impossible to overtake on this narrow circuit. With six wins under my belt, it was still a successful season for me,” said Ammermüller.

Igor Walilko (PL/Overdrive Racing by Huber) was thrilled with his first podium result in the Porsche Carrera Cup Deutschland. “It’s a fantastic end to the season. At first I was faster than Michael Ammermüller, but I didn’t want to risk making a reckless overtaking manoeuvre,” said Walilko. Porsche-Junior Jaxon Evans (Team Project 1 – JBR) concluded his debut season in the national one-make cup on fourth place. “That’s a good conclusion. It was a season full of experiences, which I enjoyed,” stated the New Zealander. Fifth place went to David Kolkmann (D/Black Falcon). Following the 22-year-old over the line were Dylan Pereira (L/Lechner Racing Team), Henric Skoog (S/Overdrive Racing by Huber) and Jaap van Lagen (NL/Förch Racing). Porsche-Junior Andlauer finished on ninth place. The 20-year-old was running in fourth place only to slide into the gravel trap in the fifth lap and drop back to ninth place. Toni Wolf (D/Car Collection Motorsport) rounded off the top ten at his home event. The young racer lives in Schönbrunn in the Erzgebirge district.

The decision in the amateur standings also went down-to-the wire on Sunday: Rivas (L/Black Falcon Team Textar) won the final round and took home the class title. His two toughest rivals on the 3.645-kilometre racetrack were Stefan Rehkopf (D/Huber Racing) and Andreas Sczepansky (D/QA Racing by Kurt Ecke Motorsport). Evans claimed an early title in the rookie category at the penultimate race weekend of the season, with BWT Lechner Racing winning the team title.

With Sunday’s race at the Sachsenring, the 30th anniversary season of the Porsche Carrera Cup Deutschland came to an end. Andlauer is the 26th champion of the national one-make cup. During the season, the youngster from Lyon earned 262.5 points, beating Ammermüller (260 points) and ten Voorde (220 points).