Sam Brabham brought the curtain down on his impressive racing return in this year’s Porsche Carrera Cup GB championship with a class podium – his fifth in an eight-race campaign – during the season finale at Brands Hatch, laying the foundations for a strong 2020. 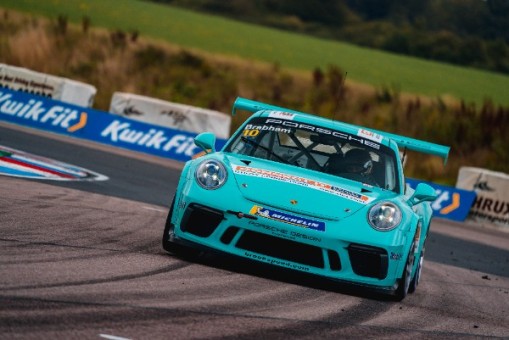 After a five-year sabbatical from full-time racing, the 25-year-old joined the championship in time for round seven – held at Thruxton over his 25th birthday weekend in August – running with the Team Connect It with Brookspeed Motorsport. Brabham’s four-round campaign in the Pro-Am class was used as a forerunner ahead of a potential full-season entry in 2020. It was also a timely return, with 2019 marking 60 years since the Brabham name first stood on top of the sport as world champion.

Despite joining at the mid-point of the season, which put him up against drivers who were already up to speed with their 460bhp 911 GT3 Cup cars, Brabham faced the challenge with determination and skill, finishing the year with a Pro-Am Class win and four further class podium finishes, proving his potential in the world of GT racing.

The Brands Hatch weekend – held alongside the British Touring Car Championship season finale on the legendary 2.4-mile Grand Prix Circuit – proved to be one of the strongest of Brabham’s comeback. After qualifying ninth overall and third in the Pro-Am order, Brabham launched a great move on eventual class champion Karl Leonard at Dingle Dell in the wet to snatch second in class during the first outing. In the dry second race, Brabham tackled the track on slick tyres for the first time since his 2014 Formula Ford days, yet still got himself into the fight for the Pro-Am podium places before a grassy moment left him fourth at the flag. Such was Brabham’s pace, he was only 0.2sec off the fastest lap for the class.

Speaking after his final outing of the year, Sam Brabham said: “I didn’t expect to be on the podium at all this season, so to end the season with a class win and four top-three finishes is amazing. At the start, I was treating these four rounds like a testing experience to learn.

“After the first round I figured it out more and more. It’s been a shame about the weather, as we haven’t had consistent conditions at many of the rounds, which would have helped me gain a stronger and consistent knowledge. However, considering I didn’t think I’d be racing at all this year, I’m really proud of what I’ve achieved. Also for the team, it was their first time in the Pro-Am class for a while and my engineer’s first year, and they’ve all done an amazing job.

“For next year, I’m looking at coming back to build on progress made this year. The more driving I do, the better it will be. Porsche Carrera Cup GB is such a fantastic package to be and progress myself, the car has been a challenge but I hope I get the chance to continue that development.”

Despite only contesting four rounds of the Porsche Carrera Cup GB, Brabham still made his mark in each.

Thruxton, August 17-18
Qualified: 12th overall, fourth in Pro-Am; Race One: 14th overall, third in Pro-Am; Race Two: DNF
Sam impressed on his first run at the high-speed Thruxton circuit, despite the weekend suffering from mixed conditions. Starting the first race on slick tyres in worsening conditions, Brabham scored a Pro-Am podium on his first attempt, and would have made it two had it not been for a spin in race two.

Silverstone GP, August 30/September 1
Qualified: 10th overall, third in Pro-Am; Race One: seventh overall, first in Pro-Am; Race Two: ninth overall, second in Pro-Am
It only took Sam three races to find his way back to the top step of the podium, with a fighting drive to a maiden Pro-Am victory in the first race on the undercard of the FIA World Endurance Championship. Brabham passed class pace-setter Karl Leonard at Village and pulled five-seconds clear to win. He was then second in race two, despite struggling with front-end grip.

Silverstone National, September 28/29
Qualified: eighth overall, second in Pro-Am; Race One: 14th overall, third in Pro-Am; Race Two: 14th overall, fourth in Pro-Am
Amid the biggest grid of the season, Sam put in his best qualifying performance of the season, with his top time just half-a-second away from outright pole. Race one was again afflicted by mixed conditions, with Sam starting on slick tyres on a drying track. After some hairy opening laps that dropped Sam back to fifth in class, he battled back to third in Pro-Am. Race two was the opposite, with the field starting on wet rubber as the track dried. Sam finished fourth in class.

Brands Hatch GP, October 13/14
Qualified: 12th overall, third in Pro-Am; Race One: ninth overall, second in Pro-Am; Race Two: 14th overall, fourth in Pro-Am
After qualifying third in the Pro-Am order, Sam battled past class champion-in-waiting Leonard to secure second – his fifth Pro-Am podium appearance. The season finale ran on a dry circuit, with Sam quickly adapting to the slick tyres to get into the fight for the podium, before a mistake at Dingle Dell tested his car control and dropped him to fourth.

Sam Brabham answers some key questions about his 2019 performance.

What’s been your biggest learning curve or challenge?
“Learning the car. I know I can drive but learning a car as tricky as the Porsche was the biggest challenge – understanding how it works and being a racing driver again. I’ve been away for so long, it was all a massive, massive step. It’s been quite emotional at times, what I’ve achieved in such short space of time. I didn’t think I would even be racing this year.”

What was your highlight of the season or most encouraging moment?
“Equally the win and qualifying at the Silverstone WEC round. It was a light bulb moment when everything started to click. I never expected to win against drivers that have been doing it for a good few years in just my third race back. Dad summed it up to perfection, “you never expected to be where you are but you’ve done a fantastic job and should be really proud”. That means an incredible amount coming from him. I’m so grateful to Connect It, Forresters and all involved that allowed me to do it, without them I wouldn’t be racing.”

What’s been your key to progress?
“Just believing I can still do it, having not driven for so long. You start to doubt yourself but you have to appreciate when you do a good job and keep working hard. I spent plenty of time away from the circuit and that time has also been important to developing myself and my self-belief. For the first time in five years I managed to have consistent time in the car, and I’ll only get better from that. Now the work starts ahead of 2020.”