The streets of Surfers Paradise on the Gold Coast of Queensland will play host the eighth and final round of the 2019 Porsche PAYCE Carrera Cup Australia Championship this weekend. 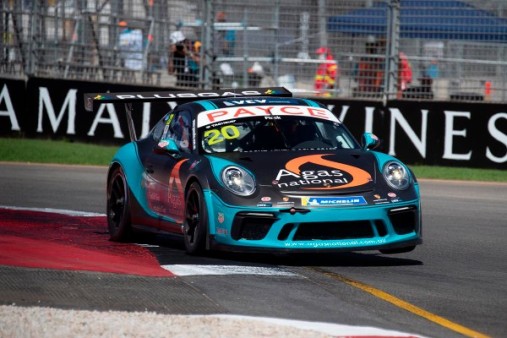 The infamous street circuit – famous for its sharp kerbs and unforgiving nature – has hosted Australia’s premier one-make category every year it has been in operation. This year is the 15th time the championship has raced on the Gold Coast and the 10th time it has hosted the championship’s final round.

The Gold Coast is also the site of the closest finish in Porsche PAYCE Carrera Cup history – though it probably didn’t feel like it at the time! David Russell crossed the line 5.0456s in front of Steve Richards to win the first race in 2014, however, a five-second penalty for a start infringement meant the official margin was only 0.0456s in the final results!

No driver has ever won a Gold Coast Porsche PAYCE Carrera Cup Australia round without winning at least one of the races on that weekend. After dominant performances in the last two rounds at both Tailem Bend and Bathurst, the SRG Global Porsche 911 GT3 Cup Car of Jordan Love leads the outright Championship and the Michelin Junior has won the last six races in a row, becoming the first driver to do this since Craig Baird in 2006.

Love is also only the fourth driver in series history to win six races in a row, joining Jim Richards, Alex Davison and Baird on the exclusive list. The record for most race wins in a row, however (8) was set by Richards in 2003.
Love’s 13 Porsche PAYCE Carrera Cup Australia victories in his short career are only bettered by Baird, Davison, Richards, Matt Campbell and Fabian Coulthard in the series’ history books.

The 2019 series could end up having the closest margin in title history given Love enters the final round only two points in front of Sonic Racing teammate Dale Wood. The smallest series-winning margin in history is 20 points in 2017 when David Wall beat Andre Heimgartner to the title.

Cooper Murray will be Love and Wood’s biggest threat for race victory, based on his recent form and the fact that McElrea Racing has won three of the last four rounds on the Gold Coast (Matt Campbell 2015 & 2016, Jaxon Evans 2017)

Another race favourite in contention for the overall Championship fight is 2017 champion, David Wall. The Wall Racing driver and team owner, scored his 15th Porsche PAYCE Carrera Cup Australia podium finish in the last round at Bathurst, which moved him to fifth on the all-time podium list in series history behind only Craig Baird, Alex Davison, Jim Richards and Steve Richards. The ever-competitive Porsche Centre Melbourne entrant of Nick McBride lies in fourth in the championship on 780 points, behind Wall (837), Wood (929) and Love (931).

Michelin GT3 Cup Challenge Championship leaders Harri Jones and Aaron Love will make their Carrera Cup debuts in the Pro class as well this weekend in preparation for the 2020 season. The Michelin Junior pairing along with TAG Heuer Pro-Am driver Greg Ward become the 212th, 213th and 214th drivers to compete in the series.

All eyes will also be on the TAG Heuer Pro-Am battle with Championship leader, Adrian Flack (842) expected to come under fire from Liam Talbot (836) and Roger Lago (818). Others to watch in the fiercely competitive Pro-Am class include Sam Shahin, Tim Miles, Dean Cook and Scott Taylor.

The weekend gets underway at 09:35 on Friday with two practice sessions, before a 20-minute qualifying session at the end of the day. Race 1 on Saturday will crown the Porsche Endurance Cup Champion in both classes while Sunday’s last two races will decide both the overall and TAG Heuer Pro-Am champions for 2019.