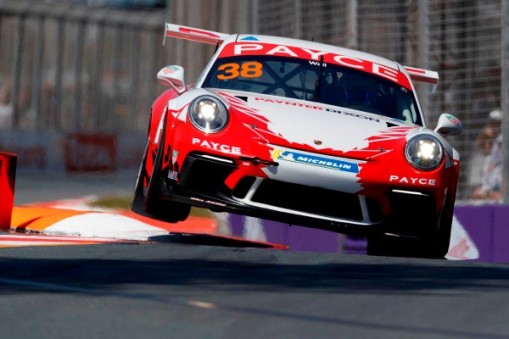 An equally impressive effort saw Sam Shahin superbly claim his second TAG Heuer Pro-Am pole position of the year and qualify his car ninth outright in one of the tightest fields of the entire season.

Exactly one second covered the top 14 cars in a pulsating 20-minute session that saw David Wall bank a new Qualifying record on the Gold Coast with a stunning 1m11.9712s flyer – the first ever lap under One minute, twelve seconds by a Cup Car at the circuit.

Love was also beneath the existing qualifying record – set last year by Wall – while the two on the front row were 0.2 seconds quicker than Murray and Wood who make up row two.

Wall’s pole was the ninth of his career and the third of his season, ensuring he finishes the year with more TAG Heuer Pole Awards than any other driver.

The Sydneysider sits third in the championship and remains in title calculations heading into race one tomorrow.

“I said to the boys before Qualifying that if we could be in the elevens it would be quite cool,” Wall said.

“You come from such a place of finesse like Bathurst and come here and basically hang on, it’s a very different atmosphere for sure. But I felt like we maximised the car and I felt like I got 99 per cent from it.

“It’s the business end of the year and we’re making sure we don’t leave anything behind. I had a red-hot go and glad to come out with the P1, for sure.”

The pulsating session saw Wall on top for a majority, banking his best lap on his final flyer even after his key rivals had finished their final laps.

Love jumped to second late in the session while Wood was also a contender throughout – the Sonic Racing teammates often trading positions.

Murray survived a hefty brush with the wall at turn two to qualify third while Nick McBride, the round winner on the Gold Coast twelve months ago, qualified fifth.

Michelin Juniors Thomas Maxwell and Cameron Hill were next, the latter remarkably surviving a wild spin in the beach chicane without making any contact with the wall. Michael Almond putting all four full-season Sonic Racing entries in the top eight.

He then had to watch as class title contender Liam Talbot came agonisingly close to beating The Bend Motorsport Park-supported car to the category pole; the latter falling short by a tiny 0.01 seconds.

Tim Miles qualified third in TAG Heuer Pro-Am – at one stage leading the class – while title leader Adrian Flack was fourth in class and 14th overall.

Shahin’s pole was the third of his career and his second of the year, his last one coming at Albert Park in March this year.

His effort was equally satisfying given a hefty crash at the same venue twelve months ago left him with an injured ankle and a lengthy recovery.

“It feels actually amazing. I’m incredibly relieved and I’ve done the hard work throughout the year but without the results to show for it,” Shahin said.

“I’ve had to overcome some demons this weekend, I had a nasty, high-speed crash at this track exactly twelve months ago and only four weeks ago I had the pins and plates removed from my ankle. I really wanted to get that out of my mind before I came to this track again.

“It’s a track that needs a lot of commitment. I had my thinking cap on today and I was committed.”

While Steven Richards’ return to form following a tough season continued with a strong 10th outright, the pair of graduates from the Porsche Michelin GT3 Cup Challenge Australia series impressed with their debut Carrera Cup efforts.

Despite the spread in positions between the Love siblings, in reality the margin between the pair was just 0.9 seconds – showing how tight the field is this weekend.

With the grid set attention now turns to the finale’ of the Carrera Cup Enduro Cup, which concludes on Saturday afternoon via a 28-lap challenge on the Surfers Paradise circuit.

The first major championship of the year to be decided has Jordan Love holding a 23-point lead over Dale Wood across the five longer-distance races contested to date.

Nick McBride, nine points further back, and David Wall (one behind McBride) also remain in contention for the prestigious award.

With 60-points up for grabs, Adrian Flack can-not be beaten for the TAG Heuer Pro-Am enduro cup championship thanks to his 64-point margin over Roger Lago.

The latter, however, sits just two points in front of Liam Talbot in the battle for second and third.