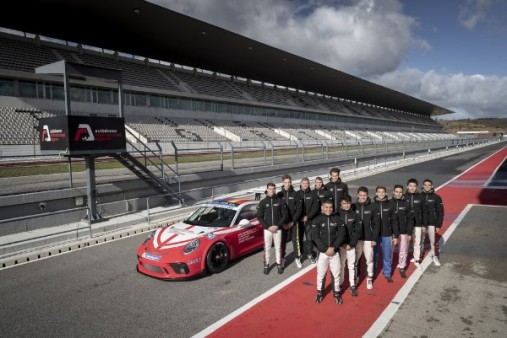 The driver chosen by Porsche will receive a comprehensive sponsorship package that includes 225,000 euros for a season in the Porsche Mobil 1 Supercup in 2020.

Over three days, the candidates had the chance to demonstrate their prowess. During a simulated racing weekend at the Autódromo Internacional do Algarve, which included a practice, qualifying and race, they not only had to display their driving skills but also aspects such as technical understanding, interaction with the engineers, dealing with the media and physical fitness.

The drivers, who were selected for their outstanding performances in their respective Porsche national one-make cups, exhibited a high driving standard in the 485 hp Porsche 911 GT3 Cup.

All candidates had to fulfil certain requirements. They had to be 23 years or younger, finish a national Porsche one-make cup in the top five and pass a medical check-up.

Together with 20-year old Love representing Australia, the international group of candidates included 21-year-old Vitor Baptista, who was nominated by Carrera Cup Brazil. Diego Bertonelli is 21 years old and competed in the Porsche Carrera Cup Italia. Nineteen-year-old Hugo Chevalier from the Carrera Cup France as well as the Canadian Roman De Angelis came to Portimão as wildcards.

The selection of the new Porsche Junior will be based on the collected data, which will be evaluated in the coming days. In addition to financial backing for the season, the sponsorship programme includes support from the former Porsche works driver Sascha Maassen as a driver coach at all race weekends of the Porsche Mobil 1 Supercup.

Similar to the Porsche works drivers, the successful candidate receives sports medicine and sports training-related mentoring from the University of Potsdam. Media seminars and mental fitness training are also part of the instruction content on the path to becoming a professional racing driver. Moreover, the Porsche Juniors will be involved in marketing activities and PR appointments.

Traditionally, Porsche has sponsored young racing drivers since 1997 and supports them in their climb up the motorsport career ladder. A prime example is New Zealander, Earl Bamber, who worked his way up through the ranks of Porsche’s motorsport pyramid from a national Cup Challenge to become a works driver.

Bamber was selected as a Porsche Junior in 2013. Two years later he won the legendary 24 Hours of Le Mans in the Porsche 919 Hybrid. In 2017, he secured another Le Mans victory, and in 2019 he won the IMSA WeatherTech SportsCar Championship. Nine of the current Porsche works drivers and Porsche Young Professionals are former Porsche Juniors.

Le Mans 24 Hour and Bathurst 12 hour winner, Matt Campbell is another who came through the Porsche Motorsport pyramid after being successful at both Porsche Michelin GT3 Cup Challenge Australia and then in Porsche PAYCE Carrera Cup Australia (2016 champion).

Most recently, Jaxon Evans would ascend through the pyramid following Matt, after finishing runner-up in Porsche Michelin GT3 Cup Challenge in 2016 and winning the 2018 Porsche PAYCE Carrera Cup Australia Championship, to earn his spot in the Porsche Junior Shootout last year.

After winning the Porsche Junior Shootout Evans competed in the Porsche Mobil 1 Shootout this year and sealed the Rookie of the Year title in Porsche Carrera Cup Deutschland.  Porsche PAYCE Carrera Cup Australia and Porsche Michelin GT3 Cup Challenge Australia arguably remain the most proven pathway in Australia to highest levels of motorsport.