The 2020 IMSA WeatherTech SportsCar Championship season got off to a successful start for Porsche Motorsport factory and customer programs with the annual ROAR Before the Rolex 24 at Daytona International Speedway, January 3 – 5. At the end of three days of testing and qualifying sessions for both the factory-entered Porsche 911 RSR-19 and customer-prepared Porsche 911 GT3 R race cars, all left the Florida test with a positive outlook for the upcoming Rolex 24 At Daytona on January 25 – 26. 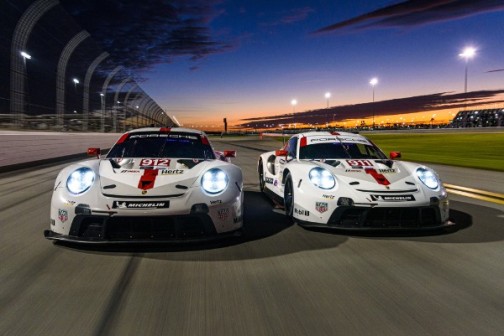 The focus of the weekend – which featured seven test sessions and a 15-minute qualifying session for both the GTLM factory cars and GTD Pro-Am style customer class – was twofold with the Porsche 911 RSR-19 making its North American competition debut and the sophomore 911 GT3 R race car entered with new team and driver combinations. While learning was paramount, qualifying – held Saturday for the GTD class and Sunday for GTLM – helped to lock-in pit lane location for the race itself. A good spot on pit lane can help maximize efficiency during green flag stops – which come approximately every hour under green flag conditions. While an all-out sprint for two trips around the clock, pit strategy plays a vital role in the success of any Daytona-winning program.

By virtue of a qualifying time of one-minute, 42.686-seconds set by Nick Tandy (Great Britain), he and co-drivers Frédéric Makowiecki (France) and Matt Campbell (Australia), will have second-choice of pit stalls in the GTLM class for the Porsche GT Team. Tandy was a narrow 1,000th of a second off the fastest time of the session in the No. 911 Porsche GT Team Porsche 911 RSR-19. Defending series’ champion Laurens Vanthoor (Belgium) qualified the No. 912 he shares with fellow champion Earl Bamber (New Zealand) and Mathieu Jaminet (France), fifth-place in class with a 1:42.903. This was the North American competition debut for the 510-hp Porsche race car that features an evolutionary update to its revolutionary predecessor, which captured the IMSA GTLM Manufacturer, Team and Driver Championships in 2019. The entire GTLM field was separated by less than 0.5-seconds over the 3.56 mile (5.73 km), 12-turn sports car layout.

Adding to the “to-do” list for the Porsche factory program was a new Michelin tire introduced to IMSA in 2020. The new tire, being run by all GTLM programs, has proven to be an improvement to the already strong Michelin Pilot racing slick used in previous seasons. However, the change has been great enough to create a significant learning curve to match it to the Porsche 911 RSR-19 in North America, particularly at Daytona.

The combination oval and infield road course is a unicorn on the schedule with the high-banks of the NASCAR oval and the tight, flat road course that winds through the Daytona Beach, Florida-facility. The challenge each year is to prepare a fast and reliable race car that can conquer 24-hours around the track at nearly qualifying times. As no other track can replicate the unique combination, the ROAR test is a vital opportunity for teams, drivers and Porsche to ready for the 58th Running of the Rolex 24 At Daytona.

Steffen Höllwarth, Head of Operations, IMSA Championship.
“After three days of testing here at Daytona, this is the conclusion of a really successful test for us. It is always special having the first official outing with a new car. This is especially true since, here in IMSA, the season starts out with the biggest highlight of the season: the 24 Hours of Daytona. The track is unique. You have to find the right compromise of downforce and drag levels. Track time during race week is very limited so this is why we had a long list of things to try this weekend. We successfully went through that list. We still have some homework to do before we come back here in two weeks’ time. We feel well-prepared to take-on the first race of the new car in its first official race in North America.”

Frédéric Makowiecki, Driver, No. 911 Porsche GT Team Porsche 911 RSR.
“I think this was a good test for us. It was important to come here in conditions closer to what they will be in the race. I think we are closer to what we will see then so we now start to have a better picture of what we will experience during the race weekend. We have some work to do to understand the new tire but I am very happy with the preparation by the team. I can say, since my first time in the USA in 2015, that the team is at the highest level I have seen it. I am really happy to spend time with my two teammates. We are here to learn the car and prepare for the 24-Hour but we are also here to strengthen our new relationship as teammates.”

Nick Tandy, Driver, No. 911 Porsche GT Team Porsche 911 RSR.
“The qualifying session was a good session, it was an interesting session. The track was a lot cooler in the morning than we had experienced in the first two days so it was difficult to get a read on the setup, especially with the new Michelin tires. But I am sure it was the same for all the manufacturers with the new tire. We are happy with the behavior of the car. We are pleased to have a decent pit allocation for the race, which is important. It was nice to drive the car on low fuel weight and new tires in this configuration. It is something we don’t get to do often.”

Matt Campbell, Driver, No. 911 Porsche GT Team Porsche 911 RSR.
“It is a brand new car and it’s the first time for it here. Everyone is getting experience with it. For me, I have a little bit more to learn being that this is my first time joining the team in IMSA with the factory effort. Joining Nick and Fred is a fantastic opportunity for myself and something I am really excited for it. I have two great guys around me and I am really looking forward to competing here in the endurance races with them.”

Earl Bamber, Driver, No. 912 Porsche GT Team Porsche 911 RSR.
“It is nice to debut the new 911 RSR in America. I think we did some really good testing and we are well prepared for the 24.”

Laurens Vanthoor, Driver, No. 912 Porsche GT Team Porsche 911 RSR.
“We are still learning the new car. We are continuing to improve each session, to learn the new systems. This was the first qualifying with this car and overall it was not too bad. There is still room for improvement but I am quite happy.”

Mathieu Jaminet, Driver, No. 912 Porsche GT Team Porsche 911 RSR.
“I am pleased to be back with the guys on the American team, Earl and Laurens. The car worked pretty well. We made some good progress and we learned our tools for this brand new car. I think we are well prepared for this race and I look forward to being back in two weeks.”

Patrick Long, Driver, No. 16 Wright Motorsports Porsche 911 GT3 R.
“An uneventful Roar Before the 24 is what we wanted, and we were able to achieve our objectives. Our main objective was to treat this like a race weekend, using the minimal running time leading into the race to fine-tune. I’m proud of the group. Everyone gelled quickly and worked efficiently. Competition will be tight, as always. That’s modern GT racing. We executed the plan and look forward to the race.”

Ryan Hardwick, Driver, No. 16 Wright Motorsports Porsche 911 GT3 R.
“I really enjoyed the Roar Before the 24. I made a large improvement from where we started. Where we’re leaving off, I feel my pace in the car is where it needs to be for the race. I feel like I accomplished my goals. For the team, I think we had a really good test. We finished up a lot further down the road than where we started. We’re in a good spot. The feeling is really positive in the Wright Motorsports camp, and I personally am really looking forward to the race. We have as good of a shot as anyone to have a great result. I can’t wait to get after it.”

Anthony Imperato, Driver, No. 16 Wright Motorsports Porsche 911 GT3 R.
“It was a cool experience to take part in my first Roar Before the 24. It went really well for us, and the team did a great job. We made a lot of progress over the three days. Our car is quick and I feel confident going into the race.”

Klaus Bachler, Driver, No. 16 Wright Motorsports Porsche 911 GT3 R.
“I am really happy with how the Roar Before the 24 test went for us. Our main goal was to focus on our race set-up and optimizing race procedures. John Wright and his crew did a perfect job and we tried a lot of different things. I enjoyed working together with my teammates Ryan, Anthony and Patrick, and I’m really looking forward to come back in two weeks to the Rolex At Daytona.”