Ross Wylie claimed his maiden Porsche Carrera Cup GB outright race victory on his début at the ultra-fast Thruxton circuit today (20 Sep) – having narrowly been denied a second podium finish of the season earlier in the day. Having started his MacConnal-Mason Gallery supported Porsche 911 GT3 from eighth place, the Dumfries driver crossed the finishing line fourth, a mere 0.315secs behind the third-placed car in the 47-mile opening race. 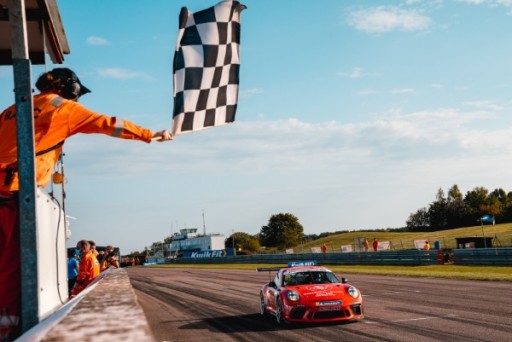 In the second race of the day, Wylie made a blistering start from the outside of the front row to lead at the end of the opening lap by 1.2 secs. Ross extended his lead to 2.4secs until championship leader Harry King overtook Wylie at mid-distance.

But Wylie was back in front four-laps later when King suffered a puncture, Ross cautiously cruising to an untroubled 4.5secs victory after 20-laps – the Scotsman creditably taking great care of his tyres around the 2.36-mile track in Hampshire which Ross had never previously raced at in his eight-year car racing career. Ross, who remains sixth in the championship standings but now only 10-points off third place, is back in action for rounds 11 & 12 at Silverstone next weekend (26-27 Sep).

“I’m delighted to finally get my first Porsche outright victory. I’d just missed out on a podium in the opening race so I was very hopeful of good pace in Race 2. I made a good start off the line, which was obviously critical, and pulled out a gap at the front until Harry [King] got into second place. He was pushing very hard and I gave him space to overtake for the lead as he was faster and I was mindful of taking home a healthy points score even if it meant not winning.

“But there is a massive need to manage tyres at this track and although I’d never raced here previously, I took advice from those who had in the respect of the abrasive nature of Thruxton’s track surface. Harry suffered a puncture for the second consecutive race which allowed me back in front four laps later. Josh Webster in second-place also had a puncture so I was even more careful in the closing laps to keep off the kerbs which could easily damage a tyre.

“Thruxton was a bit of an eye-opener, it’s incredibly fast and unique. But I loved the experience and after my victory, it’s firmly up there as one of my favourite tracks! The In2Racing guys again provided me with a great car and I’m indebted to MacConnal-Mason Gallery for its support. My aim is to keep the momentum going as we head to Silverstone next weekend knowing that I still need to work on my performance in qualifying. As I proved in Race 2, starting at the front is the key to a top result in such a closely fought one-make series.”