As soon as his No. 25 NGT Motorsport Porsche 911 GT3 Cup race car crosses the starting line next Thursday evening at Road Atlanta for the first of two, 45-minute Porsche GT3 Cup Challenge USA by Yokohama races, Victor Gomez IV will be the series’ 2018 Gold Cup champion. 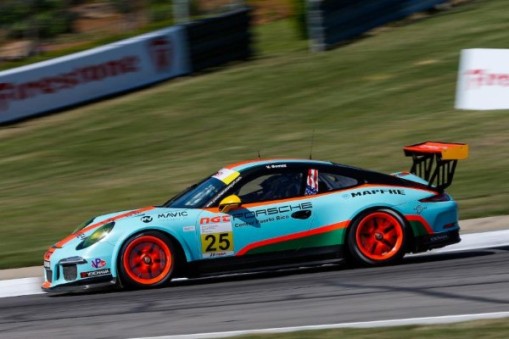 The Gold Cup is for 911 GT3 Cup race cars built between 2014 and 2016, and the Puerto Rican driver has dominated the class this season, with 11 victories from the season’s 14 races to date. And while the championship is almost a foregone conclusion, Gomez is still chomping at the bit to go racing.

“Honestly, I’ve been like a little kid,” Gomez said. “I can’t sleep. I can’t eat. I just need to get to Atlanta.

“I’ve been training really hard physically. I’ve been doing long hours in the simulator, just to show our true potential. Since we only have to start the first race, I can show what I really can do, because all season, I’ve been giving my 100 percent. I’m always making sure the car ends up in one piece to secure the championship.”

With 11 wins, Gomez has had plenty of highlights throughout the season. There’s one race in particular that stands out to him.

“The (first) race at Barber,” said Gomez, referring to the doubleheader at the picturesque Alabama circuit back in April. “I qualified first and two minutes before the race, the race director came and told me my lap was disqualified due to some technical reasons and I’d have to start the car from last.

Gomez is quick to credit his team, NGT Motorsport, for his performance. This year’s title would be the team’s sixth in GT3 Cup Challenge USA competition.

“NGT’s a great team,” he said. “I think that championships are won in training, so (team owner) Ramez (Wahab) and all the guys in NGT give specific focus in having long hours in data, just going deep into data and finding where the speed is. We emphasize that a lot in NGT.

“I feel like a family at NGT. Like, all the guys are literally my brothers and Ramez and (his wife) Sylvia are like my second parents. Every time I go to the track, I feel like it’s my second family.”

This is Gomez’s third season in the GT3 Cup Challenge USA, which he entered for the first time in 2016 as the IMSA Hurley Haywood GT3 Scholarship recipient. He feels strongly about how the series has helped him develop as a driver.

“First of all, being in the official Porsche GT3 Cup series in the U.S. is a prestige,” he said. “It’s an honor. I mean, I’m battling against the best amateur drivers in the U.S. driving Porsches. So, just to be around them, I learn a lot.

“I get to race against quality drivers that I know are giving their 100 percent. It’s the place to be if you want to be something in the sport. It’s a great development series and I think the correct path to be where I want to be in the future.”

Looking toward the future, Gomez is hoping to parlay a Gold Cup title this year into a ride in the Platinum Cup class – for new generation 911 GT3 Cup cars – next season. Beyond that, he’s hopeful of achieving the pinnacle in sports car racing.

“I would say my long-term goal would be to do endurance racing,” he said. “I’m really, really into that and I want to start. I want to start getting more experienced with multi-class racing series and longer races.”

The Porsche GT3 Cup Challenge USA by Yokohama wraps up its 2018 season with two 45-minute races at Road Atlanta as part of the prestigious Motul Petit Le Mans event week for the IMSA WeatherTech SportsCar Championship.