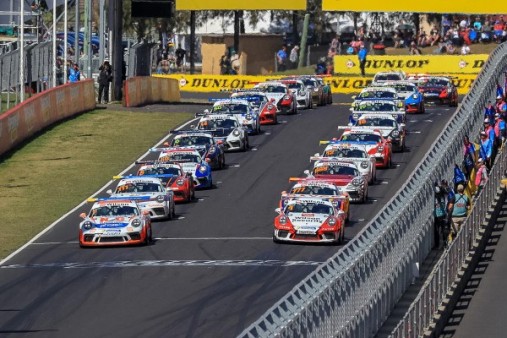 David Wall started from pole position, though it was Evans who was first into the opening corner with Jordan Love moving from the second row of the grid to second place as the safety car was called to the circuit.

Roger Lago was passing Indiran Padayachee on the run up Mountain Straight when the duo touched, spearing Lago across the circuit and into Dale Wood; both Lago and Wood failing to finish their second race of the weekend.

Evans retained the front position from the restart and, despite challenges from fellow Michelin Junior Love, the Queensland-based New Zealander claimed the race win, his fifth for the season and 10th in the Carrera Cup championship.

“To start on the front row was one thing, but to get the jump on Wall and lead the field on the first lap was pretty special. I’m happy to come away with the win considering where we qualified on Friday,” said Evans, who ended Thursday’s qualifying session in ninth.

“We’re really just trying to build the gap between us and Dylan at the moment and hopefully we take a decent lead into the final round at the Gold Coast in a couple of weeks.”

Cameron Hill continued his impressive Bathurst weekend with his second fourth place of the weekend from O’Keeffe in fifth, continuing his move through the field after his weekend hopes were dashed with dramas at the opening corner of race one.

Glen Wood placed sixth from Nick McBride, Adam Garwood and James Moffat, who finished ninth from the rear of the grid, while Peter Major rounded out the top 10.

O’Keeffe’s difficult Bathurst round has given Evans a significant advantage in the Outright and Pro class championship race. With four races and 240 points still on offer, Evans now holds a commanding 114-point lead in the Outright points and a 125-point margin in the Pro class standings.

Grove’s second win for the weekend didn’t come easily with Tim Miles pressuring Grove for the majority of the shortened seven-lap race.

Following Lago’s misfortune in both Bathurst races, Grove now holds a substantial 116-point lead in the Pro-Am standings ahead of the final Bathurst race on Sunday morning.

“This is a really special place to take two wins from two races. Tim Miles just kept coming and coming so I had to just keep my head down and push as hard as I could,” said Grove.

“Miles has a lot of pace this weekend and I’m really pushing, which is pretty close to my limit right around the track. I’ve got no more in me so it’s a real credit for the pressure he’s applied so far this weekend.”

Just one race remains for the penultimate Porsche Wilson Security Carrera Cup Australia round at Mount Panorama, held at 9:30am on Sunday.