The first day of the 2019 Porsche GT3 Cup Challenge Canada by Yokohama season is officially in the books at Canadian Tire Motorsport Park. 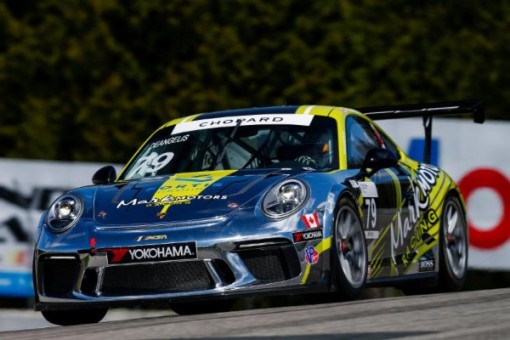 After two practices, Roman De Angelis in the No. 79 Mark Motors Racing Porsche GT3 Cup Car was fastest of the day with a lap in the afternoon session of one minute, 19.245 seconds (111.709 mph). Temperatures were a bit different between the two sessions, with the afternoon dominated by sunny skies in contrast with clouds and strong winds in the morning.

Those morning conditions will be closer to what is expected Saturday during qualifying which begins at 7:30 a.m. ET.

“We were two-tenths off this morning,” said De Angelis, who finished runner-up in the GT3 Cup Challenge Canada championship last year. “It was a bit cooler, which I think we probably could’ve gone quicker than we did in the afternoon. This track has a tendency to be quicker when it’s cold. I think we put a pretty good lap together given how hot it was. I think the temperature will play a big part tomorrow morning in qualifying considering how early we’re on.”

Saturday brings a 20-minute qualifying session at 7:30 a.m. ET follow by Race 1 at 10:55 a.m. The race will be streamed live on the Porsche GT3 Cup Challenge Canada by Yokohama Facebook page. Race 2 is scheduled for 11:55 a.m. For fans onsite, a 30-minute autograph session is slated for 9:30 a.m. at the Yokohama Tire Service Center.

For news and updates throughout the weekend, check IMSA.com and join the conversation on social media using the hashtags #GT3Canada and #IMSA.

Fierce ‘Art Cars’ Unveiled for Dussault, Borgeat at Canadian Tire Motorsport Park
Teammates Patrick Dussault and Etienne Borgeat with Porsche Lauzon/Porsche Rive-Sud unveiled liveries this weekend that competitors might be too scared to have in their rearview mirrors this year.

The ‘Art Cars’ feature brightly colored designs from Mario Adornetto, an artist local to the team’s two Porsche dealerships in Quebec. A large face of a lion is painted on Dussault’s No. 77 Porsche, while a dragon tops the No. 2 of Borgeat.

“It took maybe a month or so to configure everything and decide,” explained Dussault. “The idea was really quick, (Adornetto) knew exactly ‘I have an idea, I can do this, can do that.’ My sponsors are the owners of the two stores and they decided with him to cooperate and do the car. I only drive the car, so for me it’s white on the inside, but I actually like it. We composed around that and adapted to it. The painting was already done. The rough part was to actually put the design on the wrapping, so props to those guys. It was a very hard job.”

The reasoning behind choosing the two beasts was simple. For Dussault, the car’s livery was a depiction of what Adornetto considered his personality to be. Meanwhile, Borgeat has been a guest judge on the popular Canadian television show “Dragon’s Den,” which sees entrepreneurs pitch business ideas to a panel in hopes of receiving an investment.

“The design came from an idea that the lion pulls respect and pulls its territory, to be very confident and to seize any opportunity he can get, but through respect,” said Dussault. “He thought he saw me and he saw the type of personality I had and tried to fit something that would fit the car. He named it ‘The GT3 Lion.’”

Dussault is hoping “The GT3 Lion” can roar its way through the field this year as the Quebecker is still seeking his first win in the series.

Fellows Adjusting Nicely to Porsche at Home Track
Not only is Sam Fellows making his Porsche GT3 Cup Challenge Canada by Yokohama debut this weekend, it’s also his first time sliding into the driver’s seat of a Porsche racecar.

In the No. 35 Pfaff Motorsports Porsche as part of the series’ Gold Class, Fellows took advantage of the promoter test day on Thursday before official on-track sessions began Friday. The Toronto native has already made quick progress.

“It honestly feels amazing,” said Fellows. “You hear a lot of people talk about having difficulty switching into these cars coming in from front-engine cars or open wheel. But I feel like I took to it pretty fast. The guys are all pretty impressed with what I’ve been able to do so far and basically, it’s just tuning on the car and trying to get some more lap time. I’ll go chase as many people as I can and it’ll be fun.”

If there’s anywhere for Fellows to try something new, it’s Canadian Tire Motorsport Park. His father, sports car legend Ron Fellows, is co-owner of the circuit and the younger Fellows has been a familiar face on the CTMP staff over the years.

“That’s one of the things I thought about,” said Fellows. “Thankfully I’m not in this car the first time at (the Canadian Grand Prix in) Montreal or somewhere I don’t know or have had very little track time anyway. This is home for me and to do this makes me feel really comfortable.”

Fellows is schedule for a partial season this year in GT3 Cup Challenge Canada, with two of the next three events he’s entered in being the joint races with Porsche GT3 Cup Challenge USA by Yokohama at the Canadian Grand Prix in Montreal and at Road America during the IMSA WeatherTech SportsCar Championship weekend. Both races will see bolstered Gold Class car counts for Fellows, who is interested in mirroring the path that fellow GT3 Cup Challenge Canada driver Roman De Angelis took on his way to stardom.

“(Roman) did the same thing a couple years back,” said Fellows, of De Angelis competing in Gold Class before transitioning to the Platinum Class. “He was saying, “Ah man, you’ll have so much fun chasing the Platinum guys around.’ So that’s my goal, to basically echo what he did a couple years ago.

“He’s a really great driver so that’s my goal, to follow similar to what he did – chase as many Platinum guys as I can this weekend and then obviously when we go to Montreal and Road America, I’m looking forward to the Gold battles there. This track with all the momentum and high speeds, I’m pretty positive.”