The Racers Group is at Canadian Tire Motorsport Park this weekend for rounds 5 & 6 of fierce competition in the Pirelli GT4 America Sprint and SprintX East races. In SprintX, the team will be looking to capitalize on their strong outing two weeks ago at VIRginia International Raceway, where drivers Derek DeBoer and Sean Gibbons came away with two second-place finishes and are looking to maintain their SprintX East AM lead. In Sprint, it was unfortunately just the opposite as the TRG #66 car, and driver Spencer Pumpelly came into the VIR weekend leading in the championship but suffered an unfortunate and bizarre situation with unusual Pirelli tire failures across the board. The #66 TRG / LaSalle Solutions Porsche Cayman GT4 received zero points for both races as it suffered 2 catastrophic tire failures mid-race. In the first situation, Pumpelly was leading the race and in race #2, he was running near the front and had just turned the fastest lap when the situation occurred. In both cases, it was nearly identical with the left rear tire failing. Fortunately, no one was hurt. 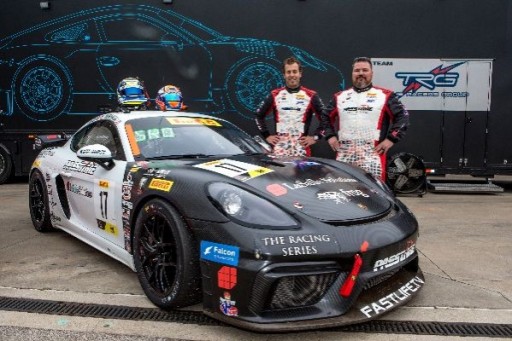 Moving forward this weekend, at a track known for speed and its incident-filled races, Mosport will truly test the team, drivers and race cars to the max over the high-speed, 10-turn, 2.458-mile course. TRG’s reputation for success at the Canadian Tire Motorsport Park hit a high point in 2016 as the team’s four drivers took home several champagne-soaked trophies, including a win, two 1-2 finishes, and a 3rd place podium during the Pirelli World Challenge race weekend. This continued a historic string of success for TRG at this track, including a GTC podium in 2013, a win in 2012, a win and a 1-2 finish in 2011 and all the way back to the beginning when team owner Kevin Buckler was driving. In 2002, the team made history with an upset victory that shocked the racing world. The unbeaten Porsche factory team of Alex Job and 4 Porsche factory drivers, suffered its first defeat with Buckler at the wheel of his Porsche #66 in the IMSA GT race. This was part of an incredible three-year run that saw the team reach dizzying heights. From that point forward TRG was consistently a dominant force at CTMP.

Kevin Buckler’s team brings an outstanding and experienced line-up with 3 drivers and 2 cars competing in GT4 Sprint and SprintX this weekend:

Derek DeBoer has racing running through his veins. Derek’s grandfather raced in the local dirt car circuit and his father followed, albeit in Top Alcohol dragsters, racing in a straight line. Derek’s racing career began 17 years ago at Laguna Seca in a Formula Dodge. Derek has raced in the competitive Formula Renault open-wheel series and spent several years in the ST class of Grand Am. No stranger to the world of endurance racing, Derek won at the 2015 LeMans Aston Martin Festival race, had his first shot at the Rolex 24 at Daytona the same year, and has raced multiple times in the 25 hours at Thunderhill. He’s also competed in multiple Continental Tire Series races. Derek joined The Racer’s Group in 2013 and has been part of the TRG racing family ever since. He is always a threatening contender in the Pirelli GTS and SprintX categories, finishing 2nd in the championship in 2015 and consistently coming away with strong finishes, podiums, and victories and 2019 looks to be especially promising with two co-drivers and a full season covering the Pirelli GT4 America SprintX East and West races ahead of him.

“We can’t wait to get back on the track — Canadian Tire Motorsports Park is one of those epic ones that really push your comfort zone. Sean and I are loving the new car and still have eyes set on the top of that podium — we’ll get there!”

Sean Gibbons started racing later in life though he’s always had a strong passion for sports cars along with the focus, drive, and determination it takes to succeed as a driver. Sean graduated from the Skip Barber racing school’s MX-5 cup program and entered his first race in 2012 in the highly competitive PCA Spec Boxster class. He won rookie honors that weekend, finishing second in his first race. Since then Gibbons has put his car on the podium nearly 70 percent of the time and set a number of track records in both the PCA and NASA series. With only 8 professional races, he has been on the top step of the podium twice and a runner up once. In 2019, Sean will once again be teamed up with Derek DeBoer for the Pirelli GT4 America East races in the new, #17, TRG | Passtime | Lasalle Solutions 2019 Porsche Cayman GT4 Clubsport MR.

“It will be my first visit to Canadian Tire Motorsports Park so I will be learning a new track while looking to maintain my lead on the GT4 SprintX East AM championship. I am looking forward to working with Derek in our awesome PassTime Porsche Cayman GT4 Clubsport again and to watching the special Canada edition of FastlifeTV that Brooke DeBoer will be traveling with us to film!”

Spencer Pumpelly was introduced to racing at a young age while watching his father contest the IMSA GTP Championship in a Ford Prototype during the late 1980s. In 1995 he enrolled in the Skip Barber Racing School and has since raced in many classes of cars successfully. He is a twenty-three year veteran of professional sports car racing and a two- time class winner in the Rolex 24 at Daytona and the 2016 Continental Sportscar Challenge ST champion. He holds multiple victories in IMSA, World Challenge, and Continental Challenge competition including class victories in six major IMSA endurance races and has appeared in the 24 Hours of Le Mans four times.

Known as one of the most talented drivers in the sportscar racing circuit, Spencer is a highly sought after driver, coach, and race winning strategist. Spencer rejoined TRG in 2018 and is no stranger to success with this team. During his six-year-long relationship with TRG, Pumpelly was a fixture on the podium with four top-three finishes in the Rolex 24, a second-place at the 12 Hours of Sebring in 2011, two 6-hour victories and more than a dozen wins and numerous podiums, across a variety of series including; Continental Tire Sportscar Challenge, Grand-Am, and American Le Mans. He also scored a podium in the NJMP ARCA NASCAR series and in 2011 brought home an epic GT class win (Pumpelly’s second) at the Rolex 24 at Daytona…with no clutch!!!

“I look forward to Canadian Tire Motorsport Park every year because it produces some of the best racing. The long flowing corners and the long back straightaway lend to good side by side running. The #66 TRG / LaSalle Solutions car should do well through the long sweeping sections and will hopefully lead us back to victory lane.
And, since it’s Canada, I’m bringing my ‘Eh’ game!”

We are all really excited to be back here at this most challenging and competitive Canadian circuit. We have been coming here for over 20 years and have run the entire gamut of emotions. In the early days, we used to come here and always be on our heels because the track was intense and they had not yet developed some of the current safety measures and runoff areas, plus… it was definitely a “local knowledge” track. In 2001 after another conservative and uninspiring race by us, I decided to turn it around and get on the front of my skis and stop with all the whining. We came here in 2002 and I spent two days testing and learning the track and basically getting my confidence up and when the big race came later that year we were ready. There really is nothing better than feeling confident and comfortable at a track like this, and that alone give you a competitive advantage, especially when your competitors know that’s how you feel. It’s like being really good in the wet and everybody knows it, so when it rains, you are already messing with their heads. We came here prepared and put together a great performance and ended up winning the race against some really strong competitors and from that point forward, we always enjoyed coming here.

I’m very proud of Sean and Derek for their solid performance this year and leading their championship hunt. They come into these races as underdogs, many times when they have not even raced at the circuit. Many of the competitors do not know them but they are starting to because Sean and Derek are fast, totally heads up and both are very clever, so I think it catches some of the other guys off guard. With Spencer and the #66 car, we are coming here a bit on our heels after the devastating weekend with two DNFs and zero points from the VIR / Pirelli debacle. This is a good track for us though and we have won here before with Spencer and in a Porsche, so we feel confident. I know the team is ready and we hope to put the LaSalle Solutions Porsche on the top step of the podium where it belongs! Separately, we have always had solid performance and a strong relationship with Pirelli and I am confident that we will be fine moving forward. Racing is not an exact science and mistakes or problems happen. The key is dealing with them head-on, owning it and moving on. I am confident that this is the approach that Pirelli will take and we will support them. Hopefully, the series can do the same thing as I know we are all waiting to see.

What an amazing racing platform has been created here with Greg Gill and his team from Pirelli GT4 America, and now with the addition of Stéphane Ratel and his world-class SRO racing organization. We have discussed this at length and all agree that GT racing is the way to go and I am so appreciative and supportive of the fantastic racing platform they have given us here in North America, and now globally, with this partnership.