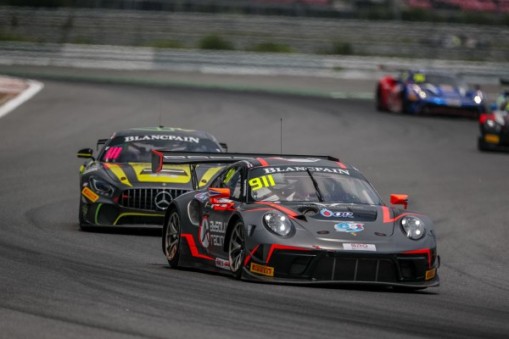 After claiming two 1-2 finishes and putting a car on the podium in all but two races so far this year, Absolute Racing’s Porsche 911 GT3 R continued to run strong at the penultimate weekend of the current campaign.

The #911 car started race one on the front row, with Tanart Sathienthirakul making a move for the lead on the opening lap. Co-driver Porsche Motorsport Asia Pacific Young Professional Philip Hamprecht brought it over the line in third for a fifth podium in nine races. With Yuan Bo and Leo Ye Hongli fifth in the sister #912 car, it was enough to seal the teams’ title with three rounds remaining.

The Thai-German duo would prove themselves worthy championship contenders on Sunday. Starting from the pit lane, they put in a stunning drive to finish eighth overall and fifth in the Silver class, ensuring they remain well in title contention ahead of the Shanghai finale.

After narrowly missing out on the Pro-Am win to come second on Saturday, Panther/AAS Motorsport took its second overall victory of 2019 in race two. 2012 Porsche Carrera Cup Asia champion Alexandre Imperatori challenged hard for the lead from the front row of the grid, but it was in the final 10 minutes with Vutthikorn Inthraphuvasak behind the wheel that the top spot changed hands.

With a decisive move to secure the win, the former Carrera Cup Asia racer further extended his advantage in the Pro-Am drivers’ championship and remains in contention for the overall title.

Following their solid points haul in race one, Bo and Ye scored their first Silver victory of the season on Sunday with an overall third-place finish on the all-Porsche 911 GT3 R rostrum. Chinese driver Ye ran third for the majority of his stint having risen from fifth on the grid with an aggressive start, and challenged for second place as the leaders ran off the circuit squabbling for the lead at the end of the 1km back straight.

Despite losing the place in the pit stop phase, Bo reclaimed the position in the closing stages of the race.

JRM took the Pro-Am pole for Saturday’s 60-minute sprint with an impressive fourth best time overall. Although series returnee Anthony Liu spun on the opening lap, dropping him to 21st, a stellar recovery drive meant the #910 car was only 0.6 seconds away from the class podium when triple Carrera Cup Asia champion Chris van der Drift met the chequered flag.

The Kiwi racer picked up a place off the line in race one and worked through the field so GT regular Liu was chasing down the overall podium in the final 10 minutes. After the early leader had already lost out to Inthraphuvasak, the Chinese driver also made his move for the team’s best result of the season with second overall.

Vutthikorn Inthraphuvasak, Panther/AAS Motorsport: “It’s been another really strong weekend for the team and with the Porsche 911 GT3 R. Although it was a shame to lose the Pro-Am win on the final lap in race one, we scored a second overall win this season on Sunday. That means I’m still in the hunt for the overall title going into Shanghai. Thanks to the team for another great round and we’re excited for the finale.”

Alexandre Imperatori, Panther/AAS Motorsport: “Overall it was a good weekend for us. Race one was a bit more difficult because of our 10-second success penalty, but we still scored well for the Pro-Am championship, and without the penalty got the overall win on Sunday. I had a good start and fought for the lead, but settled for second to create a gap to the cars behind so that Vutthi could get in with an advantage. He did a brilliant job controlling the pace. We scored maximum points so in the end it’s great for the championship. Pro-Am is looking good and we still have a chance at the overall title with Vutthi 19 points behind. We’ll have to see what happens in Shanghai.”

Leo Ye Hongli, Absolute Racing: “I’ve had good pace at this track and my team-mate is improving with every session. I’m really happy to be on the podium, thanks to all the mechanics and engineers. The car felt good and we deserved this result.”

Philip Hamprecht, Absolute Racing: “The first race went well with Tanart leading and we had a great pit stop, only 0.2 seconds over the minimum time. There was a crash in front of me I had to avoid which cost me some time, but finishing third is still good points. After we had to pull the car off the grid in race two I drove the stint of my life. The balance was mega and I think I had the second fastest lap of the race, getting halfway through the field before handing over to Tanart. In the end eighth is more points for the championship.”

Tanart Sathienthirakul, Absolute Racing: “Overall we had a solid weekend. I managed to put the car on the front row in qualifying and led in the first race. We were happy with third but not delighted. On Sunday we were unlucky having to start from the pit lane but Philip did a good job to bring us back into the lead fight. The beginning of my stint was strong but we faded in the middle and finished eighth. It was not the best result but at least we scored a few points.”

Chris van der Drift, JRM: “It’s great to get an overall podium. When I handed the car to Anthony he did a stellar job. What hurt us most was when we pitted there were four other cars in the fast lane so we lost a few seconds there. That could have changed the outcome of the race, but in any case an overall and class podium is great. The Porsche 911 GT3 R was mega fast again this weekend.”

Alexandre Gibot, Head of Porsche Motorsport Asia Pacific: “It’s been a great weekend for our customers as they have performed magnificently in the Porsche 911 GT3 R. It was fantastic to see our customers take all three spots on the podium for the second time this year – it’s a great reward for all their hard work and dedication. Congratulations to Absolute Racing for taking the teams’ title with three races to spare, and to Panther/AAS Motorsport for their win. Hats off to JRM for their best result this season. Now we all focus on the season finale in Shanghai.”